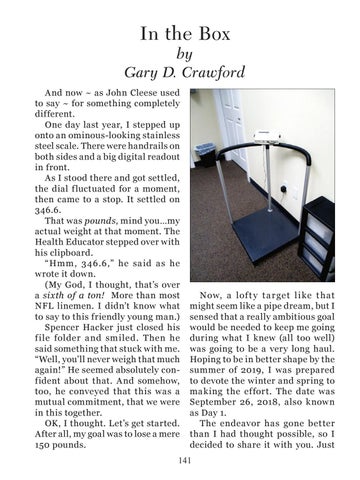 by Gary D. Crawford And now ~ as John Cleese used to say ~ for something completely different. One day last year, I stepped up onto an ominous-looking stainless steel scale. There were handrails on both sides and a big digital readout in front. As I stood there and got settled, the dial f luctuated for a moment, then came to a stop. It settled on 346.6. That was pounds, mind you…my actual weight at that moment. The Health Educator stepped over with his clipboard. “Hmm, 346.6,” he sa id a s he wrote it down. (My God, I thought, that’s over a sixth of a ton! More than most NFL linemen. I didn’t know what to say to this friendly young man.) Spencer Hacker just closed his f ile folder and smiled. Then he said something that stuck with me. “Well, you’ll never weigh that much again!” He seemed absolutely confident about that. And somehow, too, he conveyed that this was a mutual commitment, that we were in this together. OK, I thought. Let’s get started. After all, my goal was to lose a mere 150 pounds.

Now, a lof t y t a r ge t l i ke t hat might seem like a pipe dream, but I sensed that a really ambitious goal would be needed to keep me going during what I knew (all too well) was going to be a very long haul. Hoping to be in better shape by the summer of 2019, I was prepared to devote the winter and spring to making the effort. The date was September 26, 2018, also known as Day 1. The endeavor has gone better than I had thought possible, so I decided to share it with you. Just