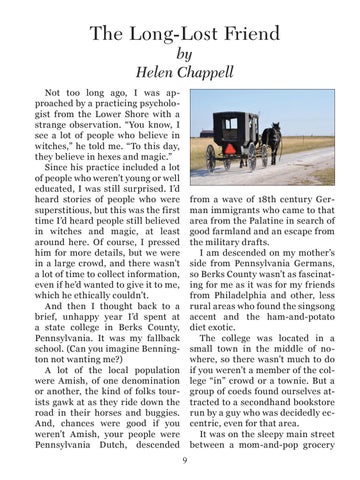 The Long-Lost Friend by Helen Chappell

Not too long ago, I was approached by a practicing psychologist from the Lower Shore with a strange observation. “You know, I see a lot of people who believe in witches,” he told me. “To this day, they believe in hexes and magic.” Since his practice included a lot of people who weren’t young or well educated, I was still surprised. I’d heard stories of people who were superstitious, but this was the first time I’d heard people still believed in witches and magic, at least around here. Of course, I pressed him for more details, but we were in a large crowd, and there wasn’t a lot of time to collect information, even if he’d wanted to give it to me, which he ethically couldn’t. And then I thought back to a brief, unhappy year I’d spent at a state college in Berks County, Pennsylvania. It was my fallback school. (Can you imagine Bennington not wanting me?) A lot of the local population were Amish, of one denomination or another, the kind of folks tourists gawk at as they ride down the road in their horses and buggies. And, chances were good if you weren’t Amish, your people were Pennsylvania Dutch, descended

from a wave of 18th century German immigrants who came to that area from the Palatine in search of good farmland and an escape from the military drafts. I am descended on my mother’s side from Pennsylvania Germans, so Berks County wasn’t as fascinating for me as it was for my friends from Philadelphia and other, less rural areas who found the singsong accent and the ham-and-potato diet exotic. The college was located in a small town in the middle of nowhere, so there wasn’t much to do if you weren’t a member of the college “in” crowd or a townie. But a group of coeds found ourselves attracted to a secondhand bookstore run by a guy who was decidedly eccentric, even for that area. It was on the sleepy main street between a mom-and-pop grocery 9