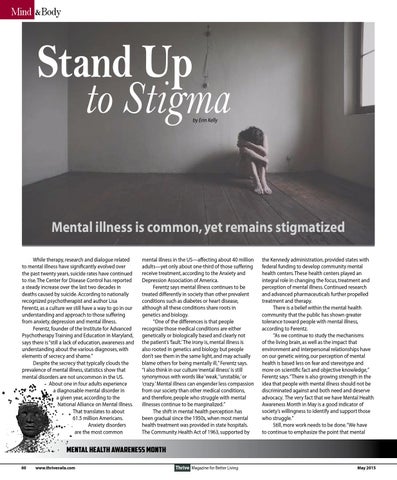 Stand Up to Stigma by Erin Kelly

Mental illness is common, yet remains stigmatized While therapy, research and dialogue related to mental illness have significantly evolved over the past twenty years, suicide rates have continued to rise. The Center for Disease Control has reported a steady increase over the last two decades in deaths caused by suicide. According to nationally recognized psychotherapist and author Lisa Ferentz, as a culture we still have a way to go in our understanding and approach to those suffering from anxiety, depression and mental illness. Ferentz, founder of the Institute for Advanced Psychotherapy Training and Education in Maryland, says there is “still a lack of education, awareness and understanding about the various diagnoses, with elements of secrecy and shame.” Despite the secrecy that typically clouds the prevalence of mental illness, statistics show that mental disorders are not uncommon in the US. About one in four adults experience a diagnosable mental disorder in a given year, according to the National Alliance on Mental Illness. That translates to about 61.5 million Americans. Anxiety disorders are the most common

mental illness in the US—affecting about 40 million adults—yet only about one-third of those suffering receive treatment, according to the Anxiety and Depression Association of America. Ferentz says mental illness continues to be treated differently in society than other prevalent conditions such as diabetes or heart disease, although all these conditions share roots in genetics and biology. “One of the differences is that people recognize those medical conditions are either genetically or biologically based and clearly not the patient’s ‘fault.’ The irony is, mental illness is also rooted in genetics and biology but people don’t see them in the same light, and may actually blame others for being mentally ill,” Ferentz says. “I also think in our culture ‘mental illness’ is still synonymous with words like ‘weak,’ ‘unstable,’ or ‘crazy.’ Mental illness can engender less compassion from our society than other medical conditions, and therefore, people who struggle with mental illnesses continue to be marginalized.” The shift in mental health perception has been gradual since the 1950s, when most mental health treatment was provided in state hospitals. The Community Health Act of 1963, supported by

the Kennedy administration, provided states with federal funding to develop community mental health centers. These health centers played an integral role in changing the focus, treatment and perception of mental illness. Continued research and advanced pharmaceuticals further propelled treatment and therapy. There is a belief within the mental health community that the public has shown greater tolerance toward people with mental illness, according to Ferentz. “As we continue to study the mechanisms of the living brain, as well as the impact that environment and interpersonal relationships have on our genetic wiring, our perception of mental health is based less on fear and stereotype and more on scientific fact and objective knowledge,” Ferentz says. “There is also growing strength in the idea that people with mental illness should not be discriminated against and both need and deserve advocacy. The very fact that we have Mental Health Awareness Month in May is a good indicator of society’s willingness to identify and support those who struggle.” Still, more work needs to be done. “We have to continue to emphasize the point that mental 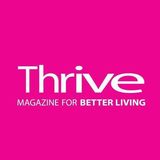