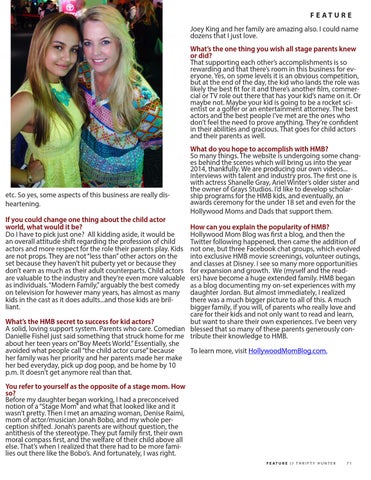 F E AT U R E Joey King and her family are amazing also. I could name dozens that I just love. What’s the one thing you wish all stage parents knew or did? That supporting each other’s accomplishments is so rewarding and that there’s room in this business for everyone. Yes, on some levels it is an obvious competition, but at the end of the day, the kid who lands the role was likely the best fit for it and there’s another film, commercial or TV role out there that has your kid’s name on it. Or maybe not. Maybe your kid is going to be a rocket scientist or a golfer or an entertainment attorney. The best actors and the best people I’ve met are the ones who don’t feel the need to prove anything. They’re confident in their abilities and gracious. That goes for child actors and their parents as well.

etc. So yes, some aspects of this business are really disheartening. If you could change one thing about the child actor world, what would it be? Do I have to pick just one? All kidding aside, it would be an overall attitude shift regarding the profession of child actors and more respect for the role their parents play. Kids are not props. They are not “less than” other actors on the set because they haven’t hit puberty yet or because they don’t earn as much as their adult counterparts. Child actors are valuable to the industry and they’re even more valuable as individuals. “Modern Family,” arguably the best comedy on television for however many years, has almost as many kids in the cast as it does adults...and those kids are brilliant.

What do you hope to accomplish with HMB? So many things. The website is undergoing some changes behind the scenes which will bring us into the year 2014, thankfully. We are producing our own videos... interviews with talent and industry pros. The first one is with actress Shanelle Gray, Ariel Winter’s older sister and the owner of Grays Studios. I’d like to develop scholarship programs for the HMB kids, and eventually, an awards ceremony for the under 18 set and even for the Hollywood Moms and Dads that support them.

How can you explain the popularity of HMB? Hollywood Mom Blog was first a blog, and then the Twitter following happened, then came the addition of not one, but three Facebook chat groups, which evolved into exclusive HMB movie screenings, volunteer outings, and classes at Disney. I see so many more opportunities for expansion and growth. We (myself and the readers) have become a huge extended family. HMB began as a blog documenting my on-set experiences with my daughter Jordan. But almost immediately, I realized there was a much bigger picture to all of this. A much bigger family, if you will, of parents who really love and care for their kids and not only want to read and learn, What’s the HMB secret to success for kid actors? but want to share their own experiences. I’ve been very A solid, loving support system. Parents who care. Comedian blessed that so many of these parents generously conDanielle Fishel just said something that struck home for me tribute their knowledge to HMB. about her teen years on”Boy Meets World.” Essentially, she avoided what people call “the child actor curse” because To learn more, visit HollywoodMomBlog.com. her family was her priority and her parents made her make her bed everyday, pick up dog poop, and be home by 10 p.m. It doesn’t get anymore real than that. You refer to yourself as the opposite of a stage mom. How so? Before my daughter began working, I had a preconceived notion of a “Stage Mom” and what that looked like and it wasn’t pretty. Then I met an amazing woman, Denise Raimi, mom of actor/musician Jonah Bobo, and my whole perception shifted. Jonah’s parents are without question, the antithesis of the stereotype. They put family first, their own moral compass first, and the welfare of their child above all else. That’s when I realized that there had to be more families out there like the Bobo’s. And fortunately, I was right. F E AT U R E / / T H R I F T Y H U N T E R