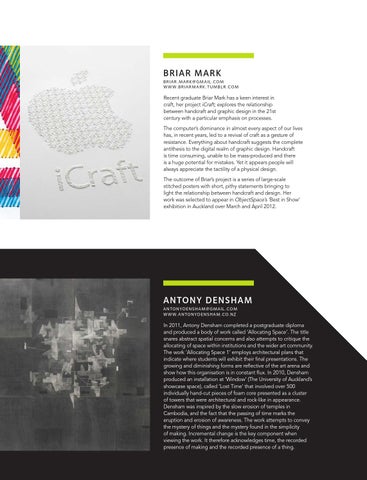 Recent graduate Briar Mark has a keen interest in craft, her project iCraft; explores the relationship between handcraft and graphic design in the 21st century with a particular emphasis on processes. The computer’s dominance in almost every aspect of our lives has, in recent years, led to a revival of craft as a gesture of resistance. Everything about handcraft suggests the complete antithesis to the digital realm of graphic design. Handcraft is time consuming, unable to be mass-produced and there is a huge potential for mistakes. Yet it appears people will always appreciate the tactility of a physical design. The outcome of Briar’s project is a series of large-scale stitched posters with short, pithy statements bringing to light the relationship between handcraft and design. Her work was selected to appear in ObjectSpace’s ‘Best in Show’ exhibition in Auckland over March and April 2012.

In 2011, Antony Densham completed a postgraduate diploma and produced a body of work called ‘Allocating Space’. The title snares abstract spatial concerns and also attempts to critique the allocating of space within institutions and the wider art community. The work ‘Allocating Space 1’ employs architectural plans that indicate where students will exhibit their final presentations. The growing and diminishing forms are reflective of the art arena and show how this organisation is in constant flux. In 2010, Densham produced an installation at ‘Window’ (The University of Auckland’s showcase space), called ‘Lost Time’ that involved over 500 individually hand-cut pieces of foam core presented as a cluster of towers that were architectural and rock-like in appearance. Densham was inspired by the slow erosion of temples in Cambodia, and the fact that the passing of time marks the eruption and erosion of awareness. The work attempts to convey the mystery of things and the mystery found in the simplicity of making. Incremental change is the key component when viewing the work. It therefore acknowledges time, the recorded presence of making and the recorded presence of a thing. 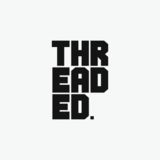