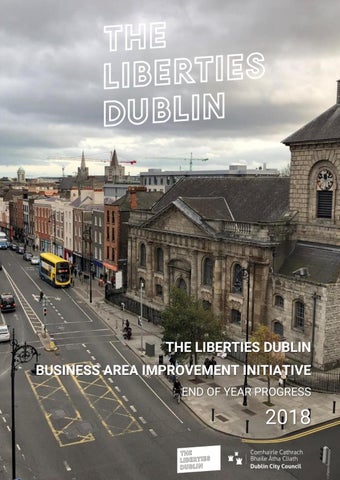 THE LIBERTIES DUBLIN: A #GREATPLACE

The Liberties Business Area Improvement Initiative is a collaborative partnership between Dublin City Council and local stakeholders and businesses in the commercial streets of The Liberties Dublin. The initiative is working to revive one of Dublin’s most historic and colourful districts to create a highly attractive area within which to live, work, visit and invest.

The Liberties Business Forum was established in 2014 to represent the interests of large and small businesses and stakeholders in Dublin’s historic Liberties district. The Forum works in partnership with Dublin City Council to oversee and deliver The Liberties Business Area Improvement Initiative. It’s an organisation to lobby for increased investment and improved services for businesses in Dublin 8 and a partnership to promote The Liberties as an integral feature of the city’s commercial, social and cultural life.

This End of Year Report sets out the achievements of the Business Area Improvement Initiative and the Forum in its fifth year, 2018.

A #GREATPLACE TO LIVE The Liberties offers a vibrant and authentic slice of Dublin life. Dublin City Council is making an investment of €15m in streets, public spaces and amenities in The Liberties to build an even better community. Following the success of Weaver Park in 2017, work took place this year to refurbish other parks in the area, including St Audoen’s Park on High Street, St Catherine’s Graveyard Park on Thomas Court and St James’s Graveyard on James Street. A new pocket park - St Luke’s Park - has also been developed as part of the grounds of the recently refurbished Thomas Burgh House (formerly St Luke’s Church). Getting the small things right makes a big difference. From energy efficient street lighting, to additional cycle parking, to repairing street names, to caring for street trees and small green spaces— better managed streets and spaces in 2018 contributed to improved quality of life in the area. Vigilance and community engagement make for happy communities. The City Council and local Garda held four community policing fora in 2018 to assist local residents and businesses with issues of concern to them. Time for a party! There was reason to celebrate for the community around Carman’s Hall and Spitalfields as they marked the centenary of their housing estate with a street party in the summer. The Liberties Cultural Association continues to grow, hosting monthly walks and talks and engaging a whole new audience in the area’s fascinating history. One initiative of LCA in September to welcome overseas students to new student housing on Thomas Street garnered lots of coverage in national media. A packed year of cultural events included the second Culture Date With Dublin 8 in May, the NCAD Graduate Showcases in June and July, and the longstanding Liberties Festival, which enlivened our streets during the long hot July. Meanwhile the newly reopened Kevin Street Public Library was just one of the local stars of Open House Dublin 2018, while many of the area’s great venues and institutions opened their doors to the public for Culture Night in September.

A #GREATPLACE FOR BUSINESS The Liberties continues to improve as a location to start a business and as a place to scale up and stay. The Business Area Improvement Initiative continues to work for clean and attractive streets in The Liberties. This year saw planning approval for public realm improvements at Dolphin’s Barn and the completion of streetworks at Crane Street off Thomas Street. Thomas Street’s streetscape received a major boost with the completion of restoration work at Nos.30— 36—known to many as Frawleys. The development of new student housing also creates three new shops, expected to be occupied early in 2019. Elsewhere on Thomas Street, the refurbishments of No. 140 and 10-13 Cornmarket create beautiful new offices for the area and help to draw in new businesses. Retooling the old for new uses. Teelings moved its HQ to 10 Mill Street—the iconic Dutch Billy restored as part of ongoing work at Newmarket. Nearby, the former St Luke’s Church was restored and repurposed to a stunning new office space. The 18thC church has been in a ruinous state since the 1980s. The building is now the offices of building company JJ Rhatigan. There was also a helping hand for small businesses. Shopfront Improvement Schemes in The Liberties, Kilmainham and Inchicore and, this year, Dolphin’s Barn and Rialto delivered almost €¼m of investment in premises in these areas in the past 12 months. There were accolades a-plenty this year. In March, The GEC was awarded World’s Best Business Incubator for the second time. In November, the enterprising tradition of The Liberties was recognised in the National Enterprise Towns Awards, where we received a very respectable runner-up in the ‘Cities’ category. As of September there are now 1,400 new student housing beds operating in The Liberties including New Mill in Blackpitts, Highlight Student Housing on Thomas Street and Binary Hub at Bonham Street. By next September, a further 1,000 bedspaces will be provided with the completion of schemes at Carman’s Hall and Cork Street.

A #GREATPLACE TO VISIT The Liberties is Dublin’s ‘must see area’ Some of the capital’s most iconic visitor attractions are located in the area. Visitor numbers to The Liberties were at a bumper high in 2018, with most major attractions likely to see big increases on 2017. The development of hotels, the opening of new places to eat and shop and the addition of new visitor attractions in 2019 will see The Liberties continue to grow as a top tourist destination. In July, the Maldron Hotel at Kevin Street opened for business—the first major hotel to locate in the area. With Starwood’s Aloft Hotel at Blackpitts and the Hyatt Centric Hotel at The Coombe arriving in coming months, and a number of aparthotel developments, the choice of places to stay in The Liberties has never been wider. Whiskey is most definitely coming home to The Liberties—historically Dublin’s ‘golden triangle’ of whiskey production. Pearse Lyons Distillery completed its first year of operation at James Street, while Teeling Whiskey celebrated the first locallyproduced whiskey in almost 50 years, with its first Newmarket-distilled batch released in June. These two distilleries will be joined by Dublin Liberties Distillery and Roe &amp; Co Whiskey Distillery in 2019, while the area can also look forward to two ginneries. Historic Christ Church Cathedral saw completion of a stunning new forecourt or ‘garth’ in November, creating a fitting entrance into one of the city’s most important buildings. The work was part-funded by Fáilte Ireland’s Dubline investment fund. St Patrick’s Cathedral hosted a spectacular installation throughout November to mark the centenary of the end of World War I. ‘Fallen’ comprised 36,000 leaf-life messages suspended from the cathedral ‘s roof. The Cathedral also hosted its second Jonathan Swift Festival in December. In October, an exciting new actor-led, storytelling attraction called The Vaults Dublin opened its doors on John’s Lane. Among the grizzly delights: a famous vampire, a Cromwellian executioner and a henpecked Viking raider.

A #GREATPLACE TO INVEST Almost â&amp;#x201A;Ź2bn of investment is now transforming The Liberties. Looking ahead, 2019 is set to be one of our busiest years yet. Big changes for Francis Street Dublin City Council will commence a long awaited public realm enhancement of Francis Street. Detailed design work for the scheme will take place from January to April, with work on site from early summer. The project is expected to be completed in spring 2020. Meanwhile, work is mooted to start in Spring on a redevelopment of the Tivoli Theatre and adjoining carpark. A new Staycity-operated aparthotel is planned with 260 no. rooms, a cultural and performance space and courtyard, and new retail units along Francis Street.

A new look for Meath Street Dublin City Council has begun a project to redesign Meath Street. Initial public information meetings with businesses and the community were held in October. The ambition is to develop a draft design by Spring and progress to a Part 8 planning application later in the year. The project is 2-3 years away and will be subject to funding and resources, however there are other positive signs for Meath Street including building refurbishments and a welcome push from local businesses to enhance and revive the street. - 11 -

In Diageo World The Guinness Storehouse will embark on an expansion of its iconic Gravity Bar in 2019, doubling floorspace in the 360^ rooftop bar, and adding a new Archive building on Grand Canal Street. Diageo will also complete the new Roe &amp; Co Whiskey Distillery in the former power station building on James Street, welcoming its first visitors in early summer. More details of the planned regeneration of St James’s Gate Quarter will likely be announced in 2019 when a development partner is announced and work starts on planning and design. The 12.6 acre site is expected to transform over the next 10 years with new residential, commercial and leisure uses and new streets and spaces. Parks and Landscaping A new community park at Bridgefoot Street will be the central project of 2019. The new park includes a community garden and allotments, play areas, landscaping and a small workshop. The park is expected to go to tender shortly and commence work next year. Dublin City Council is also undertaking landscaping works at Marrowbone Lane (a small landscaped strip), conservation and landscape works to include the eventual reopening to the public of St James’s Graveyard, and further investment in St Catherine’s Park off Thomas Street. Planning for revamp of the linear park at Fatima will also be advanced during 2019. Going Up A number of building sites are set for completion or commencement in 2019. No 61 Thomas Street is a new office and restaurant development close to Vicar Street Venue that will be completed in Summer. At John Street, work is expected to start in March on a new office scheme to the rear of 88 Thomas Street. An apartment scheme for Focus Ireland at John’s Lane will complete early next year, comprising 37 no. assisted living units. Meanwhile a planning application has been submitted for a 71-bed aparthotel on the prominent vacant site at Mullinahack and St Augustine Street. There are a number of active development sites on Cork Street such as the former Donnelly Centre (now developing as student housing) and planned residential developments close to The Coombe Hospital. Subject to planning, a new 187 bedroom hotel is proposed to the rear of Vicar Street Venue, suggested to start construction later in 2019. At The Coombe, the new Hyatt Centric Hotel will open in May bringing 257 new hotel rooms to the area. The City Council is also planning to upgrade the signal crossings and public lighting on The Coombe in tandem with this project. On James’s Street, a planned aparthotel is permitted for a derelict site at Mount Brown and Cromwell Quarters. The scheme is one of a number of new development close to St James Hospital, which continues to transform with the development of the National Children&#39;s Hospital and new research centres and clinics. Planning permission was granted for a major redevelopment of Newmarket including planned residential, office, hotel, retail and leisure uses. The scheme is set across three sites. Demolition work has commenced for a planned office and market hall building at Mill Lane, which is expected to be the first site to be developed. The old Grand Canal Harbour is also the focus of activity with a revised planning application for the site expected in the new year. The continued growth of the hospital is expected to see this area develop significantly in coming years including new amenities, school premises and housing.

The Liberties Business Area Improvement Initiative is a collaboration between Dublin City Council and local businesses and stakeholders in The Liberties Dublin. This report sets out the achievements of the Initiative in its fifth year, 2018. 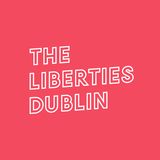 More from The Liberties Dublin