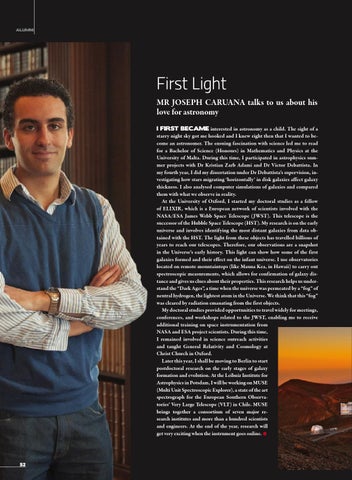 First Light MR JOSEPH CARUANA talks to us about his love for astronomy I FIRST BECAME interested in astronomy as a child. The sight of a starry night sky got me hooked and I knew right then that I wanted to become an astronomer. The ensuing fascination with science led me to read for a Bachelor of Science (Honours) in Mathematics and Physics at the University of Malta. During this time, I participated in astrophysics summer projects with Dr Kristian Zarb Adami and Dr Victor Debattista. In my fourth year, I did my dissertation under Dr Debattista’s supervision, investigating how stars migrating ‘horizontally’ in disk galaxies affect galaxy thickness. I also analysed computer simulations of galaxies and compared them with what we observe in reality. At the University of Oxford, I started my doctoral studies as a fellow of ELIXIR, which is a European network of scientists involved with the NASA/ESA James Webb Space Telescope (JWST). This telescope is the successor of the Hubble Space Telescope (HST). My research is on the early universe and involves identifying the most distant galaxies from data obtained with the HST. The light from these objects has travelled billions of years to reach our telescopes. Therefore, our observations are a snapshot in the Universe’s early history. This light can show how some of the first galaxies formed and their effect on the infant universe. I use observatories located on remote mountaintops (like Mauna Kea, in Hawaii) to carry out spectroscopic measurements, which allows for confirmation of galaxy distance and gives us clues about their properties. This research helps us understand the “Dark Ages”, a time when the universe was permeated by a “fog” of neutral hydrogen, the lightest atom in the Universe. We think that this “fog” was cleared by radiation emanating from the first objects. My doctoral studies provided opportunities to travel widely for meetings, conferences, and workshops related to the JWST, enabling me to receive additional training on space instrumentation from NASA and ESA project scientists. During this time, I remained involved in science outreach activities and taught General Relativity and Cosmology at Christ Church in Oxford. Later this year, I shall be moving to Berlin to start postdoctoral research on the early stages of galaxy formation and evolution. At the Leibniz Institute for Astrophysics in Potsdam, I will be working on MUSE (Multi Unit Spectroscopic Explorer), a state of the art spectrograph for the European Southern Observatories’ Very Large Telescope (VLT) in Chile. MUSE brings together a consortium of seven major research institutes and more than a hundred scientists and engineers. At the end of the year, research will get very exciting when the instrument goes online.

Think is the new quarterly research magazine that opens a window to the University of Malta. It tells the stories of students, alumni, researchers, and professors. Within Think, readers will find articles on how mothers juggle research and children, or ask the question: Why did humans develop a large brain? A hint: gravity. Underwater robots also feature, as does the largest telescope ever built. Local researchers are also scanning human's brain, reading brain patterns and translating these signals to move objects. Imagine moving a wheelchair with just your thoughts. Bright lights also shine on Alzheimer's and Parkinson's disease. Dr Neville Vassallo is looking into new compounds in our diet to combat these life debilitating diseases.Apart from in-depth articles, the magazine sneaks in a fun section with book and game reviews, a fact or fiction section and a 100-word idea to change Malta. There's even a few surprising internet Memes. 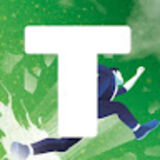