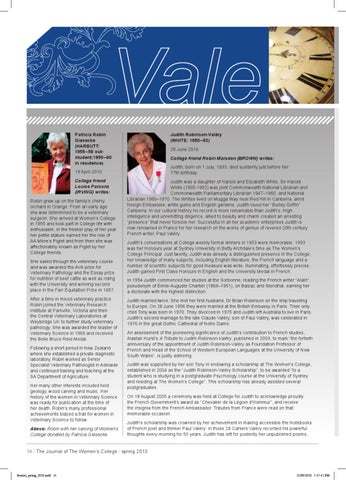 19 April 2010 College friend Louise Parsons (IRVING) writes: Robin grew up on the family’s cherry orchard in Orange. From an early age she was determined to be a veterinary surgeon. She arrived at Women’s College in 1955 and took part in College life with enthusiasm; in the fresher play of her year her petite stature earned her the role of AA Milne’s Piglet and from then she was affectionately known as Piglet by her College friends. She sailed through the veterinary course and was awarded the AVA prize for Veterinary Pathology and the Essay prize for nutrition of beef cattle as well as riding with the University and winning second place in the Farr Equitation Prize in 1957. After a time in mixed veterinary practice Robin joined the Veterinary Research Institute at Parkville, Victoria and then the Central Veterinary Laboratories at Weybridge UK to further study veterinary pathology. She was awarded the Master of Veterinary Science in 1969 and received the Belle Bruce Reid Medal. Following a short period in New Zealand where she established a private diagnostic laboratory, Robin worked as Senior Specialist Veterinary Pathologist in Adelaide and continued training and teaching at the SA Department of Agriculture. Her many other interests included field geology, wood carving and music. Her history of the women in Veterinary Science was ready for publication at the time of her death. Robin’s many professional achievements blazed a trail for women in Veterinary Science to follow. Above: Robin with her carving of Women’s College donated by Patricia Giesecke.

Judith was a daughter of Harold and Elizabeth White. Sir Harold White (1905-1992) was joint Commonwealth National Librarian and Commonwealth Parliamentary Librarian 1947–1960, and National Librarian 1960–1970. The Whites lived on Mugga Way near Red Hill in Canberra, amid foreign Embassies, white gums and English gardens. Judith loved her “Burley Griffin” Canberra. In our cultural history no record is more remarkable than Judith’s. High intelligence and unremitting diligence, allied to beauty and charm created an arresting “presence” that never forsook her. Successful in all her academic enterprises Judith is now renowned in France for her research on the works of genius of revered 20th century French writer, Paul Valéry. Judith’s conversations at College weekly formal dinners in 1953 were memorable. 1953 was her Honours year at Sydney University in Betty Archdale’s time as The Women’s College Principal. Just twenty, Judith was already a distinguished presence in the College: her knowledge of many subjects, including English literature, the French language and a number of scientific subjects for good measure was wide, illuminating, effortlessly precise. Judith gained First Class Honours in English and the University Medal in French. In 1954 Judith commenced her studies at the Sorbonne, reading the French writer “Alain”, pseudonym of Émile-Auguste Chartier (1869–1951), on Balzac and Stendhal, earning her a doctorate with the highest distinction. Judith married twice. She met her first husband, Dr Brian Robinson on the ship travelling to Europe. On 28 June 1956 they were married at the British Embassy in Paris. Their only child Tony was born in 1970. They divorced in 1975 and Judith left Australia to live in Paris. Judith’s second marriage to the late Claude Valéry, son of Paul Valéry, was celebrated in 1976 in the great Gothic Cathedral of Notre Dame. An assessment of the pioneering significance of Judith’s contribution to French studies, Alastair Hurst’s A Tribute to Judith Robinson-Valéry, published in 2003, to mark “the fortieth anniversary of the appointment of Judith Robinson-Valéry as Foundation Professor of French and Head of the School of Western European Languages at the University of New South Wales”, is justly admiring. Judith was supported by her son Tony in endowing a scholarship at The Women’s College, established in 2004 as the “Judith Robinson-Valéry Scholarship”, to be awarded “to a student who is studying in a postgraduate Psychology course at the University of Sydney and residing at The Women’s College”. This scholarship has already assisted several postgraduates. On 18 August 2005 a ceremony was held at College for Judith to acknowledge proudly the French Government’s award as “Chevalier de la Légion d’Honneur”, and receive the insignia from the French Ambassador. Tributes from France were read on that memorable occasion. Judith’s scholarship was crowned by her achievement in making accessible the Notebooks of French poet and thinker Paul Valéry: in those 29 Cahiers Valéry recorded his powerful thoughts every morning for 50 years. Judith has left for posterity her unpublished poems. Journal of The Women's College within the University of Sydney.

Journal of The Women's College within the University of Sydney.