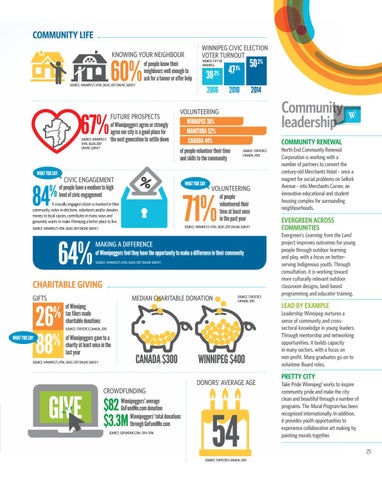 of people volunteer their time and skills to the community

of people have a medium to high level of civic engagement

A civically engaged citizen is involved in their community, votes in elections, volunteers and/or donates money to local causes, contributes in many ways and genuinely wants to make Winnipeg a better place to live.

MAKING A DIFFERENCE of Winnipeggers feel they have the opportunity to make a difference in their community SOURCE: WINNIPEG’S VITAL SIGNS 2017 ONLINE SURVEY

North End Community Renewal Corporation is working with a number of partners to convert the century-old Merchants Hotel – once a magnet for social problems on Selkirk Avenue – into Merchants Corner, an innovative educational and student housing complex for surrounding neighbourhoods.

EVERGREEN ACROSS COMMUNITIES Evergreen’s Learning from the Land project improves outcomes for young people through outdoor learning and play, with a focus on betterserving Indigenous youth. Through consultation, it is working toward more culturally relevant outdoor classroom designs, land-based programming and educator training.

LEAD BY EXAMPLE Leadership Winnipeg nurtures a sense of community and crosssectoral knowledge in young leaders. Through mentorship and networking opportunities, it builds capacity in many sectors, with a focus on non-profit. Many graduates go on to volunteer Board roles.

PRETTY CITY Take Pride Winnipeg! works to inspire community pride and make the city clean and beautiful through a number of programs. The Mural Program has been recognized internationally. In addition, it provides youth opportunities to experience collaborative art making by painting murals together. 25

Winnipeg’s Vital Signs® 2017 is a snapshot of life in Winnipeg. 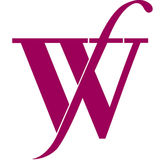