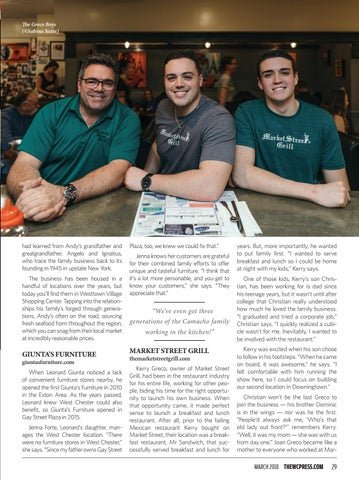 had learned from Andy’s grandfather and greatgrandfather, Angelo and Ignatius, who trace the family business back to its founding in 1945 in upstate New York. The business has been housed in a handful of locations over the years, but today you’ll find them in Westtown Village Shopping Center. Tapping into the relationships his family’s forged through generations, Andy’s often on the road, sourcing fresh seafood from throughout the region, which you can snag from their local market at incredibly reasonable prices.

Plaza, too, we knew we could fix that.” Jenna knows her customers are grateful for their combined family efforts to offer unique and tasteful furniture. “I think that it’s a lot more personable, and you get to know your customers,” she says. “They appreciate that.”

“We’ve even got three generations of the Camacho family working in the kitchen!”

Kerry Greco, owner of Market Street Grill, had been in the restaurant industry for his entire life, working for other people, biding his time for the right opportunity to launch his own business. When that opportunity came, it made perfect sense to launch a breakfast and lunch restaurant. After all, prior to the failing Mexican restaurant Kerry bought on Market Street, their location was a breakfast restaurant, Mr Sandwich, that successfully served breakfast and lunch for

years. But, more importantly, he wanted to put family first. “I wanted to serve breakfast and lunch so I could be home at night with my kids,” Kerry says. One of those kids, Kerry’s son Christian, has been working for is dad since his teenage years, but it wasn’t until after college that Christian really understood how much he loved the family business. “I graduated and tried a corporate job,” Christian says. “I quickly realized a cubicle wasn’t for me. Inevitably, I wanted to be involved with the restaurant.” Kerry was excited when his son chose to follow in his footsteps. “When he came on board, it was awesome,” he says. “I felt comfortable with him running the show here, so I could focus on building our second location in Downingtown.” Christian won’t be the last Greco to join the business — his brother Dominic is in the wings — nor was he the first. “People’d always ask me, ‘Who’s that old lady out front?’” remembers Kerry. “Well, it was my mom — she was with us from day one.” Joan Greco became like a mother to everyone who worked at Mar-