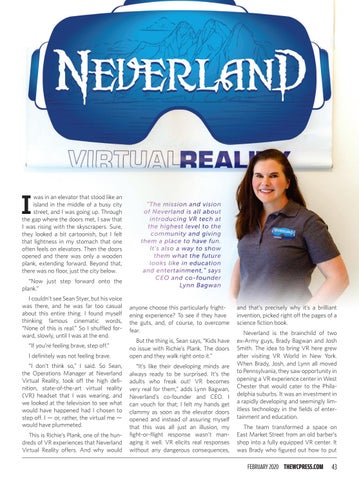 was in an elevator that stood like an island in the middle of a busy city street, and I was going up. Through the gap where the doors met, I saw that I was rising with the skyscrapers. Sure, they looked a bit cartoonish, but I felt that lightness in my stomach that one often feels on elevators. Then the doors opened and there was only a wooden plank, extending forward. Beyond that, there was no floor, just the city below. “Now just step forward onto the plank.” I couldn’t see Sean Styer, but his voice was there, and he was far too casual about this entire thing. I found myself thinking famous cinematic words, “None of this is real.” So I shuffled forward, slowly, until I was at the end. “If you’re feeling brave, step off.” I definitely was not feeling brave. “I don’t think so,” I said. So Sean, the Operations Manager at Neverland Virtual Reality, took off the high definition, state-of-the-art virtual reality (VR) headset that I was wearing, and we looked at the television to see what would have happened had I chosen to step off. I — or, rather, the virtual me — would have plummeted. This is Richie’s Plank, one of the hundreds of VR experiences that Neverland Virtual Reality offers. And why would

“The mission and vision of Neverland is all about introducing VR tech at the highest level to the community and giving them a place to have fun. It’s also a way to show them what the future looks like in education and entertainment,” says CEO and co-founder Lynn Bagwan

anyone choose this particularly frightening experience? To see if they have the guts, and, of course, to overcome fear. But the thing is, Sean says, “Kids have no issue with Richie’s Plank. The doors open and they walk right onto it.” “It’s like their developing minds are always ready to be surprised. It’s the adults who freak out! VR becomes very real for them,” adds Lynn Bagwan, Neverland’s co-founder and CEO. I can vouch for that; I felt my hands get clammy as soon as the elevator doors opened and instead of assuring myself that this was all just an illusion, my fight-or-flight response wasn’t managing it well. VR elicits real responses without any dangerous consequences,

and that’s precisely why it’s a brilliant invention, picked right off the pages of a science fiction book. Neverland is the brainchild of two ex-Army guys, Brady Bagwan and Josh Smith. The idea to bring VR here grew after visiting VR World in New York. When Brady, Josh, and Lynn all moved to Pennsylvania, they saw opportunity in opening a VR experience center in West Chester that would cater to the Philadelphia suburbs. It was an investment in a rapidly developing and seemingly limitless technology in the fields of entertainment and education. The team transformed a space on East Market Street from an old barber’s shop into a fully equipped VR center. It was Brady who figured out how to put