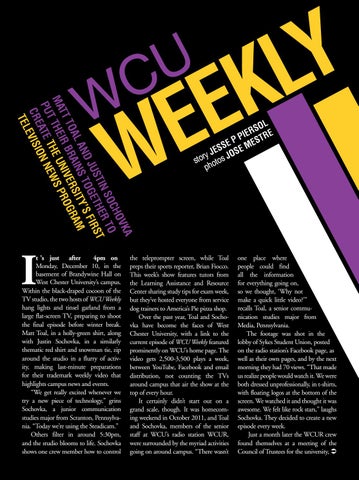 t ’s just after 4pm on Monday, December 10, in the basement of Brandywine Hall on West Chester University’s campus. Within the black-draped cocoon of the TV studio, the two hosts of WCU Weekly hang lights and tinsel garland from a large flat-screen TV, preparing to shoot the final episode before winter break. Matt Toal, in a holly-green shirt, along with Justin Sochovka, in a similarly thematic red shirt and snowman tie, zip around the studio in a flurry of activity, making last-minute preparations for their trademark weekly video that highlights campus news and events. “We get really excited whenever we try a new piece of technology,” grins Sochovka, a junior communication studies major from Scranton, Pennsylvania. “Today we’re using the Steadicam.” Others filter in around 5:30pm, and the studio blooms to life. Sochovka shows one crew member how to control

the teleprompter screen, while Toal preps their sports reporter, Brian Fiocco. This week’s show features tutors from the Learning Assistance and Resource Center sharing study tips for exam week, but they’ve hosted everyone from service dog trainers to America’s Pie pizza shop. Over the past year, Toal and Sochovka have become the faces of West Chester University, with a link to the current episode of WCU Weekly featured prominently on WCU’s home page. The video gets 2,500-3,500 plays a week, between YouTube, Facebook and email distribution, not counting the TVs around campus that air the show at the top of every hour. It certainly didn’t start out on a grand scale, though. It was homecoming weekend in October 2011, and Toal and Sochovka, members of the senior staff at WCU’s radio station WCUR, were surrounded by the myriad activities going on around campus. “There wasn’t

one place where people could find all the information for everything going on, so we thought, ‘Why not make a quick little video?’” recalls Toal, a senior communication studies major from Media, Pennsylvania. The footage was shot in the lobby of Sykes Student Union, posted on the radio station’s Facebook page, as well as their own pages, and by the next morning they had 70 views. “That made us realize people would watch it. We were both dressed unprofessionally, in t-shirts, with floating logos at the bottom of the screen. We watched it and thought it was awesome. We felt like rock stars,” laughs Sochovka. They decided to create a new episode every week. Just a month later the WCUR crew found themselves at a meeting of the Council of Trustees for the university,  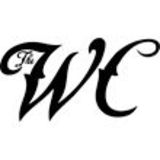