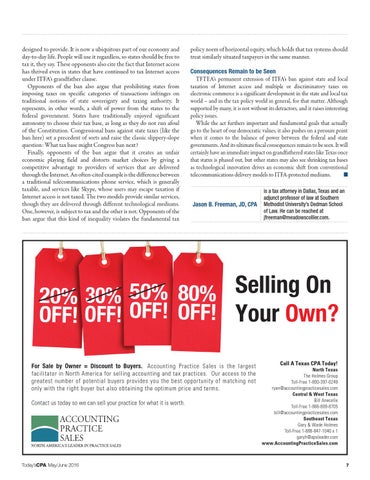 designed to provide. It is now a ubiquitous part of our economy and day-to-day life. People will use it regardless, so states should be free to tax it, they say. These opponents also cite the fact that Internet access has thrived even in states that have continued to tax Internet access under ITFA’s grandfather clause. Opponents of the ban also argue that prohibiting states from imposing taxes on specific categories of transactions infringes on traditional notions of state sovereignty and taxing authority. It represents, in other words, a shift of power from the states to the federal government. States have traditionally enjoyed significant autonomy to choose their tax base, as long as they do not run afoul of the Constitution. Congressional bans against state taxes (like the ban here) set a precedent of sorts and raise the classic slippery-slope question: What tax base might Congress ban next? Finally, opponents of the ban argue that it creates an unfair economic playing field and distorts market choices by giving a competitive advantage to providers of services that are delivered through the Internet. An often-cited example is the difference between a traditional telecommunications phone service, which is generally taxable, and services like Skype, whose users may escape taxation if Internet access is not taxed. The two models provide similar services, though they are delivered through different technological mediums. One, however, is subject to tax and the other is not. Opponents of the ban argue that this kind of inequality violates the fundamental tax

policy norm of horizontal equity, which holds that tax systems should treat similarly situated taxpayers in the same manner.

Consequences Remain to be Seen TFTEA’s permanent extension of ITFA’s ban against state and local taxation of Internet access and multiple or discriminatory taxes on electronic commerce is a significant development in the state and local tax world – and in the tax policy world in general, for that matter. Although supported by many, it is not without its detractors, and it raises interesting policy issues. While the act furthers important and fundamental goals that actually go to the heart of our democratic values, it also pushes on a pressure point when it comes to the balance of power between the federal and state governments. And its ultimate fiscal consequences remain to be seen. It will certainly have an immediate impact on grandfathered states like Texas once that status is phased out, but other states may also see shrinking tax bases as technological innovation drives an economic shift from conventional telecommunications delivery models to ITFA-protected mediums. n

is a tax attorney in Dallas, Texas and an adjunct professor of law at Southern Methodist University’s Dedman School of Law. He can be reached at jfreeman@meadowscollier.com.

Selling On 50 % 80 % 20% 30% OFF! OFF! OFF! OFF! Your Own? For Sale by Owner = Discount to Buyers. Accounting Practice Sales is the largest facilitator in North America for selling accounting and tax practices. Our access to the greatest number of potential buyers provides you the best opportunity of matching not only with the right buyer but also obtaining the optimum price and terms. Contact us today so we can sell your practice for what it is worth.

In this issue, TSCPA’s 2015-2016 year in review; the cost of retirement in financial plans; and principles-based accounting standards: what...

In this issue, TSCPA’s 2015-2016 year in review; the cost of retirement in financial plans; and principles-based accounting standards: what...