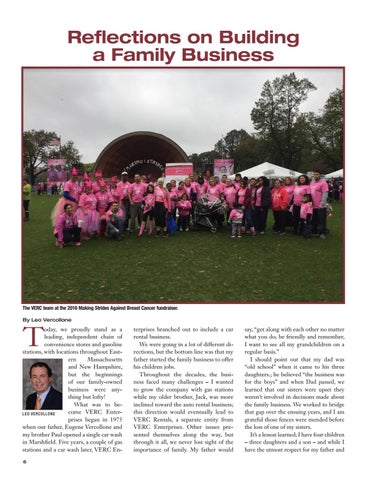 Reflections on Building a Family Business

The VERC team at the 2016 Making Strides Against Breast Cancer fundraiser. By Leo Vercollone

oday, we proudly stand as a leading, independent chain of convenience stores and gasoline stations, with locations throughout Eastern Massachusetts and New Hampshire, but the beginnings of our family-owned business were anything but lofty! What was to become VERC EnterLEO VERCOLLONE prises began in 1975 when our father, Eugene Vercollone and my brother Paul opened a single car wash in Marshfield. Five years, a couple of gas stations and a car wash later, VERC En6

terprises branched out to include a car rental business. We were going in a lot of different directions, but the bottom line was that my father started the family business to offer his children jobs. Throughout the decades, the business faced many challenges – I wanted to grow the company with gas stations while my older brother, Jack, was more inclined toward the auto rental business; this direction would eventually lead to VERC Rentals, a separate entity from VERC Enterprises. Other issues presented themselves along the way, but through it all, we never lost sight of the importance of family. My father would

say, “get along with each other no matter what you do; be friendly and remember, I want to see all my grandchildren on a regular basis.” I should point out that my dad was “old school” when it came to his three daughters.; he believed “the business was for the boys” and when Dad passed, we learned that our sisters were upset they weren’t involved in decisions made about the family business. We worked to bridge that gap over the ensuing years, and I am grateful those fences were mended before the loss of one of my sisters. It’s a lesson learned; I have four children – three daughters and a son – and while I have the utmost respect for my father and

In this issue, the forgotten factors in legacy planning, the importance of cybersecurity education and an in-depth look at the family businesses who help make the memories of our loved ones endure. 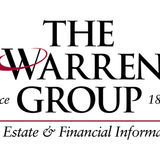