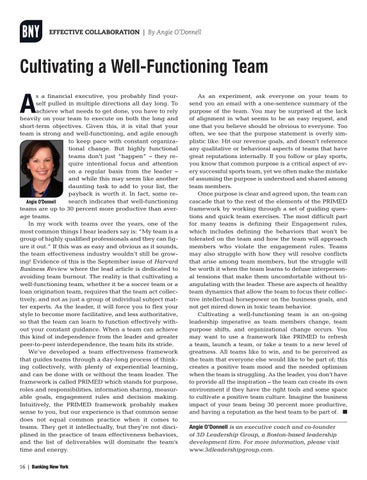 s a financial executive, you probably find yourself pulled in multiple directions all day long. To achieve what needs to get done, you have to rely heavily on your team to execute on both the long and short-term objectives. Given this, it is vital that your team is strong and well-functioning, and agile enough to keep pace with constant organizational change. But highly functional teams don’t just “happen” – they require intentional focus and attention on a regular basis from the leader – and while this may seem like another daunting task to add to your list, the payback is worth it. In fact, some research indicates that well-functioning Angie O’Donnell teams are up to 30 percent more productive than average teams. In my work with teams over the years, one of the most common things I hear leaders say is: “My team is a group of highly qualified professionals and they can figure it out.” If this was as easy and obvious as it sounds, the team effectiveness industry wouldn’t still be growing! Evidence of this is the September issue of Harvard Business Review where the lead article is dedicated to avoiding team burnout. The reality is that cultivating a well-functioning team, whether it be a soccer team or a loan origination team, requires that the team act collectively, and not as just a group of individual subject matter experts. As the leader, it will force you to flex your style to become more facilitative, and less authoritative, so that the team can learn to function effectively without your constant guidance. When a team can achieve this kind of independence from the leader and greater peer-to-peer interdependence, the team hits its stride. We’ve developed a team effectiveness framework that guides teams through a day-long process of thinking collectively, with plenty of experiential learning, and can be done with or without the team leader. The framework is called PRIMED which stands for purpose, roles and responsibilities, information sharing, measurable goals, engagement rules and decision making. Intuitively, the PRIMED framework probably makes sense to you, but our experience is that common sense does not equal common practice when it comes to teams. They get it intellectually, but they’re not disciplined in the practice of team effectiveness behaviors, and the list of deliverables will dominate the team’s time and energy. 16 | Banking New York

As an experiment, ask everyone on your team to send you an email with a one-sentence summary of the purpose of the team. You may be surprised at the lack of alignment in what seems to be an easy request, and one that you believe should be obvious to everyone. Too often, we see that the purpose statement is overly simplistic like: Hit our revenue goals, and doesn’t reference any qualitative or behavioral aspects of teams that have great reputations internally. If you follow or play sports, you know that common purpose is a critical aspect of every successful sports team, yet we often make the mistake of assuming the purpose is understood and shared among team members. Once purpose is clear and agreed upon, the team can cascade that to the rest of the elements of the PRIMED framework by working through a set of guiding questions and quick team exercises. The most difficult part for many teams is defining their Engagement rules, which includes defining the behaviors that won’t be tolerated on the team and how the team will approach members who violate the engagement rules. Teams may also struggle with how they will resolve conflicts that arise among team members, but the struggle will be worth it when the team learns to defuse interpersonal tensions that make them uncomfortable without triangulating with the leader. These are aspects of healthy team dynamics that allow the team to focus their collective intellectual horsepower on the business goals, and not get mired down in toxic team behavior. Cultivating a well-functioning team is an on-going leadership imperative as team members change, team purpose shifts, and organizational change occurs. You may want to use a framework like PRIMED to refresh a team, launch a team, or take a team to a new level of greatness. All teams like to win, and to be perceived as the team that everyone else would like to be part of; this creates a positive team mood and the needed optimism when the team is struggling. As the leader, you don’t have to provide all the inspiration – the team can create its own environment if they have the right tools and some space to cultivate a positive team culture. Imagine the business impact of your team being 30 percent more productive, and having a reputation as the best team to be part of.  ■ Angie O’Donnell is an executive coach and co-founder of 3D Leadership Group, a Boston-based leadership development firm. For more information, please visit www.3dleadershipgroup.com.

In this issue, Millennials opt for personal loans at higher rates than previous generations; cultivating a well-functioning team; and bankin...

In this issue, Millennials opt for personal loans at higher rates than previous generations; cultivating a well-functioning team; and bankin...