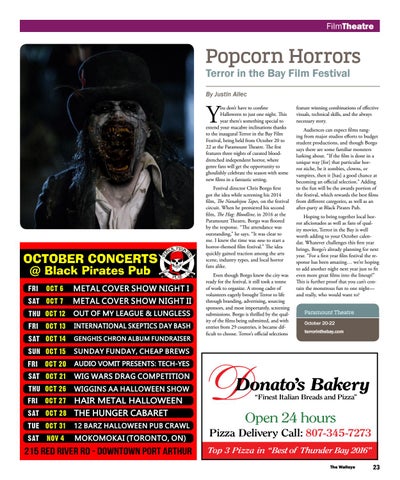 ou don’t have to confine Halloween to just one night. This year there’s something special to extend your macabre inclinations thanks to the inaugural Terror in the Bay Film Festival, being held from October 20 to 22 at the Paramount Theatre. The fest features three nights of curated blooddrenched independent horror, where genre fans will get the opportunity to ghoulishly celebrate the season with some new films in a fantastic setting. Festival director Chris Borgo first got the idea while screening his 2014 film, The Nanabijou Tapes, on the festival circuit. When he premiered his second film, The Hag: Bloodline, in 2016 at the Paramount Theatre, Borgo was floored by the response. “The attendance was outstanding,” he says. “It was clear to me. I knew the time was now to start a horror-themed film festival.” The idea quickly gained traction among the arts scene, industry types, and local horror fans alike. Even though Borgo knew the city was ready for the festival, it still took a tonne of work to organize. A strong cadre of volunteers eagerly brought Terror to life through branding, advertising, sourcing sponsors, and most importantly, screening submissions. Borgo is thrilled by the quality of the films being submitted, and with entries from 29 countries, it became difficult to choose. Terror’s official selections

feature winning combinations of effective visuals, technical skills, and the always necessary story. Audiences can expect films ranging from major studios efforts to budget student productions, and though Borgo says there are some familiar monsters lurking about. “If the film is done in a unique way [for] that particular horror niche, be it zombies, clowns, or vampires, then it [has] a good chance at becoming an official selection.” Adding to the fun will be the awards portion of the festival, which rewards the best films from different categories, as well as an after-party at Black Pirates Pub. Hoping to bring together local horror aficionados as well as fans of quality movies, Terror in the Bay is well worth adding to your October calendar. Whatever challenges this first year brings, Borgo’s already planning for next year. “For a first year film festival the response has been amazing… we’re hoping to add another night next year just to fit even more great films into the lineup!” This is further proof that you can’t contain the monstrous fun to one night— and really, who would want to?

For our October issue we look at the past, present, and future of Thunder Bay’s connection to public transportation, which goes beyond our city. Emma Christensen explores the impact of Thunder Bay’s Bombardier plant, which has 1100 employees and has manufactured approximately 2000 rail cars that are operated in cities around the world, and Bonnie Schiedel talks to Brad Loroff, manager of the Thunder Bay’s transit services division, about the city’s system and what is in the works for the future. 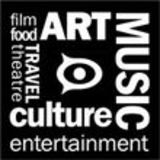