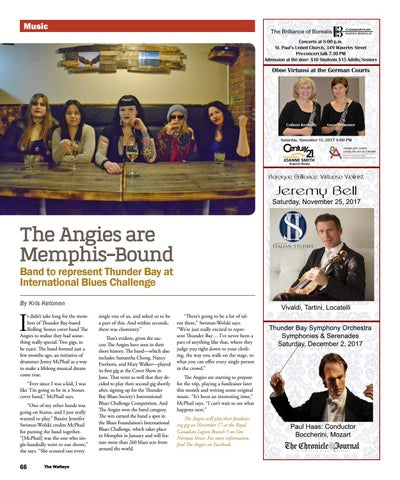 t didn’t take long for the members of Thunder Bay-based Rolling Stones cover band The Angies to realize they had something really special. Two gigs, to be exact. The band formed just a few months ago, an initiative of drummer Jenny McPhail as a way to make a lifelong musical dream come true. “Ever since I was a kid, I was like ‘I’m going to be in a Stones cover band,” McPhail says. “One of my other bands was going on hiatus, and I just really wanted to play.” Bassist Jennifer Swistun-Wolski credits McPhail for putting the band together. “[McPhail] was the one who single-handedly went to our shows,” she says. “She scouted out every

single one of us, and asked us to be a part of this. And within seconds, there was chemistry.” That’s evident, given the success The Angies have seen in their short history. The band—which also includes Samantha Chong, Nancy Freeborn, and Mary Walker—played its first gig at the Cover Show in June. That went so well that they decided to play their second gig shortly after, signing up for the Thunder Bay Blues Society’s International Blues Challenge Competition. And The Angies won the band category. The win earned the band a spot in the Blues Foundation’s International Blues Challenge, which takes place in Memphis in January and will feature more than 260 blues acts from around the world.

“There’s going to be a lot of talent there,” Swistun-Wolski says. “We’re just really excited to represent Thunder Bay… I’ve never been a part of anything like that, where they judge you right down to your clothing, the way you walk on the stage, to what you can offer every single person in the crowd.” The Angies are starting to prepare for the trip, playing a fundraiser later this month and writing some original music. “It’s been an interesting time,” McPhail says. “I can’t wait to see what happens next.” The Angies will play their fundraising gig on November 17 at the Royal Canadian Legion Branch 5 on Van Norman Street. For more information, find The Angies on Facebook.