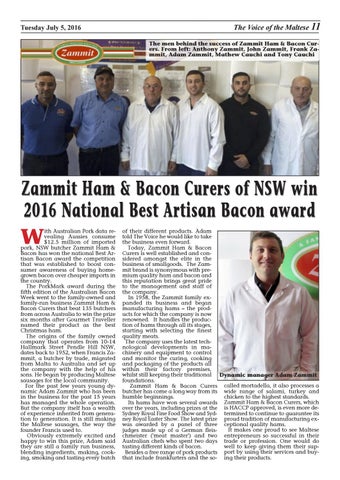 The Voice of the Maltese 11 The men behind the success of Zammit Ham & Bacon Curers. From left: Anthony Zammit, John Zammit, Frank Zammit, Adam Zammit, Mathew Cauchi and Tony Cauchi

ith Australian Pork data revealing Aussies consume $12.5 million of imported pork, NSW butcher Zammit Ham & Bacon has won the national Best Artisan Bacon award the competition that was established to boost consumer awareness of buying homegrown bacon over cheaper imports in the country. The PorkMark award during the fifth edition of the Australian Bacon Week went to the family-owned and family-run business Zammit Ham & Bacon Curers that beat 135 butchers from across Australia to win the prize six months after Gourmet Traveller named their product as the best Christmas ham. The origins of the family owned company that operates from 10-14 Hallmark Street Pendle Hill NSW, dates back to 1952, when Francis Zammit, a butcher by trade, migrated from Malta to Australia and set up the company with the help of his sons. He began by producing Maltese sausages for the local community. For the past few years young dynamic Adam Zammit who has been in the business for the past 15 years has managed the whole operation. But the company itself has a wealth of experience inherited from generation to generation. It is still making the Maltese sausages, the way the founder Francis used to. Obviously extremely excited and happy to win this prize, Adam said they are still a family run business, blending ingredients, making, cooking, smoking and tasting every batch

of their different products. Adam told The Voice he would like to take the business even forward. Today, Zammit Ham & Bacon Curers is well established and considered amongst the elite in the business of smallgoods. The Zammit brand is synonymous with premium quality ham and bacon and this reputation brings great pride to the management and staff of the company. In 1958, the Zammit family expanded its business and began manufacturing hams â&#x20AC;&#x201C; the products for which the company is now renowned. It handles the production of hams through all its stages, starting with selecting the finest quality meats. The company uses the latest technological developments in machinery and equipment to control and monitor the curing, cooking and packaging of the products all within their factory premises, whilst still keeping their traditional Dynamic manager Adam Zammit foundations. Zammit Ham & Bacon Curers called mortadella, it also processes a butcher has come a long way from its wide range of salami, turkey and chicken to the highest standards. humble beginnings. Its hams have won several awards Zammit Ham & Bacon Curers, which over the years, including prizes at the is HACCP approved, is even more deSydney Royal Fine Food Show and Syd- termined to continue to guarantee its ney Royal Easter Show. The latest prize proud tradition of manufacturing exwas awarded by a panel of three ceptional quality hams. It makes one proud to see Maltese judges made up of a German fleischmeister ('meat master') and two entrepreneurs so successful in their Australian chefs who spent two days trade or profession. One would do well to keep giving them their suptasting different kinds of bacon. Besides a free range of pork products port by using their services and buythat include frankfurters and the so- ing their products. The Voice of the Maltese

A bi-lingual (in English and Maltese) fortnightly online publication specifically targeting all Maltese living abroad with emphasis on the M...

A bi-lingual (in English and Maltese) fortnightly online publication specifically targeting all Maltese living abroad with emphasis on the M...