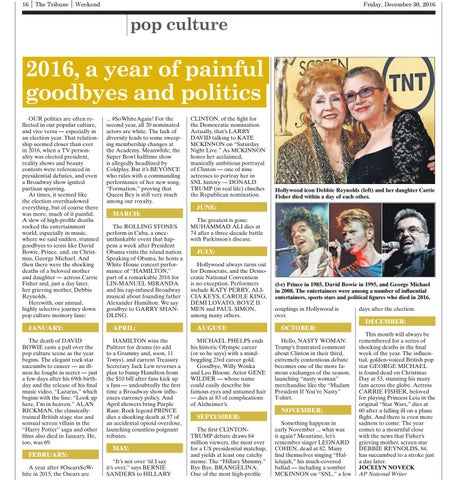 2016, a year of painful goodbyes and politics Our politics are often reflected in our popular culture, and vice versa — especially in an election year. That relationship seemed closer than ever in 2016, when a TV personality was elected president, reality shows and beauty contests were referenced in presidential debates, and even a Broadway show ignited partisan sparring. At times, it seemed like the election overshadowed everything, but of course there was more, much of it painful. A slew of high-profile deaths rocked the entertainment world, especially in music, where we said sudden, stunned goodbyes to icons like David Bowie, Prince, and, on Christmas, George Michael. And then there were the shocking deaths of a beloved mother and daughter — actress Carrie Fisher and, just a day later, her grieving mother, Debbie Reynolds. Herewith, our annual, highly selective journey down pop culture memory lane:

JANUARY: The death of DAVID BOWIE casts a pall over the pop culture scene as the year begins. The elegant rock star succumbs to cancer — an illness he fought in secret — just a few days after his 69th birthday and the release of his final music video, “Lazarus,” which begins with the line: “Look up here, I’m in heaven.” ALAN RICKMAN, the classicallytrained British stage star and sensual screen villain in the “Harry Potter” saga and other films also died in January. He, too, was 69.

FEBRUARY: A year after #OscarsSoWhite in 2015, the Oscars are

... #SoWhiteAgain! For the second year, all 20 nominated actors are white. The lack of diversity leads to some sweeping membership changes at the Academy. Meanwhile, the Super Bowl halftime show is allegedly headlined by Coldplay. But it’s BEYONCE who rules with a commanding performance of her new song, “Formation,” proving that Queen Bey is still very much among our royalty.

MARCH: The ROLLING STONES perform in Cuba, a onceunthinkable event that happens a week after President Obama visits the island nation. Speaking of Obama, he hosts a White House concert performance of “HAMILTON,” part of a remarkable 2016 for LIN-MANUEL MIRANDA and his rap-infused Broadway musical about founding father Alexander Hamilton. We say goodbye to GARRY SHANDLING.

APRIL: HAMILTON wins the Pulitzer for drama (to add to a Grammy and, soon, 11 Tonys), and current Treasury Secretary Jack Lew reverses a plan to bump Hamilton from the $10 bill after fans kick up a fuss — undoubtedly the first time a Broadway show influences currency policy. And April showers bring Purple Rain: Rock legend PRINCE dies a shocking death at 57 of an accidental opioid overdose, launching countless poignant tributes.

MAY: “It’s not over ‘til I say it’s over,” says BERNIE SANDERS to HILLARY

CLINTON, of the fight for the Democratic nomination. Actually, that’s LARRY DAVID talking to KATE MCKINNON on “Saturday Night Live.” As MCKINNON hones her acclaimed, manically ambitious portrayal of Clinton — one of nine actresses to portray her in SNL history — DONALD TRUMP (in real life) clinches the Republican nomination.

Hollywood icon Debbie Reynolds (left) and her daughter Carrie Fisher died within a day of each other.

JUNE: The greatest is gone: MUHAMMAD ALI dies at 74 after a three-decade battle with Parkinson’s disease.

JULY: Hollywood always turns out for Democrats, and the Democratic National Convention is no exception. Performers include KATY PERRY, ALICIA KEYS, CAROLE KING, DEMI LOVATO, BOYZ II MEN and PAUL SIMON, among many others.

AUGUST: MICHAEL PHELPS ends his historic Olympic career (or so he says) with a mindboggling 23rd career gold. Goodbye, Willy Wonka and Leo Bloom: Actor GENE WILDER — whose name could easily describe his famous eyes and untamed hair — dies at 83 of complications of Alzheimer’s.

SEPTEMBER: The first CLINTONTRUMP debate draws 84 million viewers, the most ever for a US presidential matchup, and yields at least one catchy meme: The “Hillary Shimmy.” Bye Bye, BRANGELINA: One of the most high-profile

(l-r) Prince in 1985, David Bowie in 1995, and George Michael in 2008. The entertainers were among a number of influential entertainers, sports stars and political figures who died in 2016. couplings in Hollywood is over.

NOVEMBER: Something happens in early November ... what was it again? Meantime, let’s remember singer LEONARD COHEN, dead at 82. Many find themselves singing “Hallelujah,” his much-covered ballad — including a somber MCKINNON on “SNL,” a few

days after the election.

DECEMBER: This month will always be remembered for a series of shocking deaths in the final week of the year. The influential, golden-voiced British pop star GEORGE MICHAEL is found dead on Christmas Day at 53, stunning his many fans across the globe. Actress CARRIE FISHER, beloved for playing Princess Leia in the original “Star Wars,” dies at 60 after a falling ill on a plane flight. And there is even more sadness to come: The year comes to a mournful close with the news that Fisher’s grieving mother, screen star DEBBIE REYNOLDS, 84, has succumbed to a stroke just a day later. JOCELYN NOVECK AP National Writer