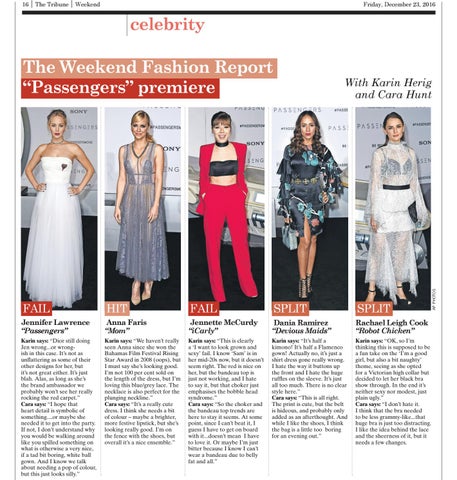 Karin says: “Dior still doing Jen wrong...or wrongish in this case. It’s not as unflattering as some of their other designs for her, but it’s not great either. It’s just blah. Alas, as long as she’s the brand ambassador we probably won’t see her really rocking the red carpet.” Cara says: “I hope that heart detail is symbolic of something....or maybe she needed it to get into the party. If not, I don’t understand why you would be walking around like you spilled something on what is otherwise a very nice, if a tad bit boring, white ball gown. And I know we talk about needing a pop of colour, but this just looks silly.”

Karin says: “We haven’t really seen Anna since she won the Bahamas Film Festival Rising Star Award in 2008 (oops), but I must say she’s looking good. I’m not 100 per cent sold on the length of the dress, but I’m loving this blue/grey lace. The necklace is also perfect for the plunging neckline.” Cara says: “It’s a really cute dress. I think she needs a bit of colour – maybe a brighter, more festive lipstick, but she’s looking really good. I’m on the fence with the shoes, but overall it’s a nice ensemble.”

Karin says: “This is clearly a ‘I want to look grown and sexy’ fail. I know ‘Sam’ is in her mid-20s now, but it doesn’t seem right. The red is nice on her, but the bandeau top is just not working, and I hate to say it, but that choker just emphasises the bobble head syndrome.” Cara says: “So the choker and the bandeau top trends are here to stay it seems. At some point, since I can’t beat it, I guess I have to get on board with it...doesn’t mean I have to love it. Or maybe I’m just bitter because I know I can’t wear a bandeau due to belly fat and all.”

Karin says: “It’s half a kimono! It’s half a Flamenco gown! Actually no, it’s just a shirt dress gone really wrong. I hate the way it buttons up the front and I hate the huge ruffles on the sleeve. It’s just all too much. There is no clear style here.” Cara says: “This is all right. The print is cute, but the belt is hideous, and probably only added as an afterthought. And while I like the shoes, I think the bag is a little too boring for an evening out.”

Karin says: “OK, so I’m thinking this is supposed to be a fun take on the ‘I’m a good girl, but also a bit naughty’ theme, seeing as she opted for a Victorian high collar but decided to let her black bra show through. In the end it’s neither sexy nor modest, just plain ugly.” Cara says: “I don’t hate it. I think that the bra needed to be less grammy-like...that huge bra is just too distracting. I like the idea behind the lace and the sheerness of it, but it needs a few changes.

With Karin Herig and Cara Hunt