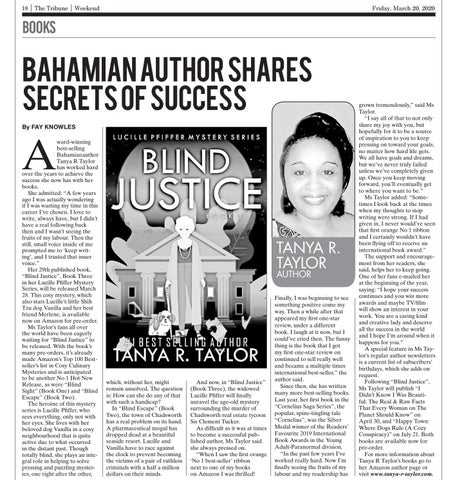 ward-winning best-selling Bahamian author Tanya R Taylor has worked hard over the years to achieve the success she now has with her books. She admitted: “A few years ago I was actually wondering if I was wasting my time in this career I’ve chosen. I love to write, always have, but I didn’t have a real following back then and I wasn’t seeing the fruits of my labour. Then the still, small voice inside of me prompted me to ‘keep writing’, and I trusted that inner voice.” Her 29th published book, “Blind Justice”, Book Three in her Lucille Pfiffer Mystery Series, will be released March 28. This cosy mystery, which also stars Lucille’s little Shih Tzu dog Vanilla and her best friend Merlene, is available now on Amazon for pre-order. Ms Taylor’s fans all over the world have been eagerly waiting for “Blind Justice” to be released. With the book’s many pre-orders, it’s already made Amazon’s Top 100 Bestseller’s list in Cosy Culinary Mysteries and is anticipated to be another No 1 Hot New Release, as were “Blind Sight” (Book One) and “Blind Escape” (Book Two). The heroine of this mystery series is Lucille Pfiffer, who sees everything, only not with her eyes. She lives with her beloved dog Vanilla in a cosy neighbourhood that is quite active due to what occurred in the distant past. Though totally blind, she plays an integral role in helping to solve pressing and puzzling mysteries, one right after the other,

which, without her, might remain unsolved. The question is: How can she do any of that with such a handicap? In “Blind Escape” (Book Two), the town of Chadsworth has a real problem on its hand. A pharmaceutical mogul has dropped dead at a beautiful seaside resort. Lucille and Vanilla have to race against the clock to prevent becoming the victims of a pair of ruthless criminals with a half a million dollars on their minds.

And now, in “Blind Justice” (Book Three), the widowed Lucille Pfiffer will finally unravel the age-old mystery surrounding the murder of Chadsworth real estate tycoon Sir Clement Tucker. As difficult as it was at times to become a successful published author, Ms Taylor said she always pressed on. “When I saw the first orange ‘No 1 best-seller’ ribbon next to one of my books on Amazon I was thrilled!

Finally, I was beginning to see something positive come my way. Then a while after that appeared my first one-star review, under a different book. I laugh at it now, but I could’ve cried then. The funny thing is the book that I got my first one-star review on continued to sell really well and became a multiple times international best-seller,” the author said. Since then, she has written many more best-selling books. Last year, her first book in the “Cornelius Saga Series”, the popular, spine-tingling tale “Cornelius”, was the Silver Medal winner of the Readers’ Favourite 2019 International Book Awards in the Young Adult-Paranormal division. “In the past few years I’ve worked really hard. Now I’m finally seeing the fruits of my labour and my readership has

grown tremendously,” said Ms Taylor. “I say all of that to not only share my joy with you, but hopefully for it to be a source of inspiration to you to keep pressing on toward your goals, no matter how hard life gets. We all have goals and dreams, but we’ve never truly failed unless we’ve completely given up. Once you keep moving forward, you’ll eventually get to where you want to be.” Ms Taylor added: “Sometimes I look back at the times when my thoughts to stop writing were strong. If I had given in, I never would’ve seen that first orange No 1 ribbon and I certainly wouldn’t have been flying off to receive an international book award.” The support and encouragement from her readers, she said, helps her to keep going. One of her fans e-mailed her at the beginning of the year, saying: “I hope your success continues and you win more awards and maybe TV/film will show an interest in your work. You are a caring kind and creative lady and deserve all the success in the world and I hope I’m around when it happens for you.” A special feature in Ms Taylor’s regular author newsletters is a current list of subscribers’ birthdays, which she adds on request. Following “Blind Justice”, Ms Taylor will publish “I Didn’t Know I Was Beautiful: The Real & Raw Facts That Every Woman on The Planet Should Know” on April 30, and “Happy Town: Where Dogs Rule (A Cozy Conspiracy)” on July 21. Both books are available now for pre-order. For more information about Tanya R Taylor’s books go to her Amazon author page or visit www.tanya-r-taylor.com.