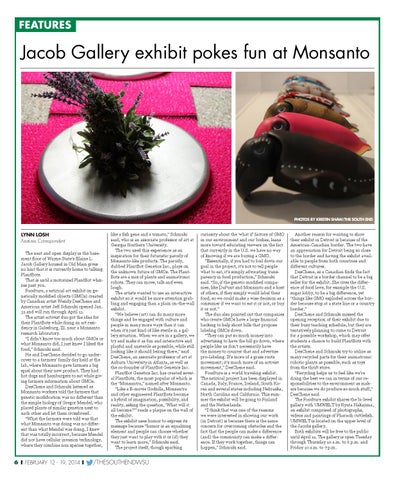 LYNN LOSH Features Correspondent The neat and open display in the basement floor of Wayne State’s Elaine L. Jacob Gallery housed in Old Main gives no hint that it is currently home to talking PlantBots. That is until a motorized PlantBot whizzes past you. Foodture, a satirical art exhibit on genetically modified objects (GMOs) created by Canadian artist Wendy DesChene and American artist Jeff Schmuki opened Jan. 31 and will run through April 11. The artist-activist duo got the idea for their PlantBots while doing an art residency in Galesburg, Ill. near a Monsanto research laboratory. “I didn’t know too much about GMOs or what Monsanto did, I just knew I liked the food,” Schmuki said. He and DesChene decided to go undercover to a farmers’ family day held at the lab, where Monsanto gave farmers a big spiel about their new product. They had hot dogs and hamburgers to eat while giving farmers information about GMOs. DesChene and Schmuki listened as Monsanto workers told the farmers that genetic modification was no different than the simple biology of Gregor Mendel, who placed plants of similar genetics next to each other and let them crossbreed. “What the farmers were told was that what Monsanto was doing was no different than what Mendel was doing, I knew that was totally incorrect, because Mendel did not have cellular invasion technology, where they combine non species together,

like a fish gene and a tomato,” Schmuki said, who is an associate professor of art at Georgia Southern University. The two used this experience as an inspiration for their futuristic parody of Monsanto-like products. The parody, dubbed PlantBot Genetics Inc., plays on the unknown future of GMOs. The PlantBots are a mix of plants and animatronic robots. They can move, talk and even laugh. The artists wanted to use an interactive exhibit so it would be more attention grabbing and engaging than a plain on-the-wall exhibit. “We believe (art) can do many more things and be engaged with culture and people in many more ways than it can when it’s just kind of like sterile in a gallery situation. When we are in a gallery, we try and make it as fun and interactive and playful and unsterile as possible, while still looking like it should belong there,” said DesChene, an associate professor of art at Auburn University in Atlanta, as well as the co-founder of PlantBot Genetics Inc. PlantBot Genetics Inc. has created several PlantBots, the most popular of which is the “Monsantra,” named after Monsanto. “Like a B-movie Godzilla, Monsantra and other engineered PlantBots become a hybrid of imagination, possibility, and reality, asking the question, ‘What will it all become?’” reads a plaque on the wall of the exhibit. The exhibit uses humor to express its message because “humor is an equalizing element and people can choose whether they just want to play with it or (if) they want to learn more,” Schmuki said. The project itself, though sparking

curiosity about the ‘what if’ factors of GMO in our environment and our bodies, leans more toward educating viewers on the fact that currently in the U.S. we have no way of knowing if we are buying a GMO. “Essentially, if you had to boil down our goal in the project, it’s not to tell people what to eat, it’s simply advocating transparency in food production,” Schmuki said. “So, if the genetic modified companies, like DuPont and Monsanto and a host of others, if they simply would label their food, so we could make a wise decision as a consumer if we want to eat it or not, or buy it or not.” The duo also pointed out that companies who create GMOs have a large financial backing to help shoot bills that propose labeling GMOs down. “They can put so much money into advertising to have the bill go down, where people like us don’t necessarily have the money to counter that and advertise pro-labeling. It’s more of a grass roots movement; it’s much more of an activist movement,” DesChene said. Foodture is a world traveling exhibit. The satirical project has been displayed in Canada, Italy, France, Iceland, South Korea and several states including Nebraska, North Carolina and California. This summer the exhibit will be going to Finland and the Netherlands. “I think that was one of the reasons we were interested in showing our work (in Detroit) is because there is the same concern for overcoming obstacles and the fact that the people can make a difference (and) the community can make a difference. If they work together, things can happen,” Schmuki said.

Another reason for wanting to show their exhibit in Detroit is because of the American-Canadian border. The two have an appreciation for Detroit being so close to the border and having the exhibit available to people from both countries and different cultures. DesChene, as a Canadian finds the fact that Detroit is a border channel to be a big seller for the exhibit. She cites the difference of food laws, for example the U.S. sugar lobby, to be a big difference, yet “things like GMO exploded across the border because stop at a state line or a country border.” DesChene and Schmuki missed the opening reception of their exhibit due to their busy teaching schedule, but they are tentatively planning to come to Detroit for a possible workshop, which may offer students a chance to build PlantBots with the artists. DesChene and Schmuki try to utilize as many recycled parts for their animatronic robotic plants as possible, such as toys from the thrift store. “Recycling helps us to feel like we’re doing the best we can in terms of our responsibilities to the environment as makers because we do produce so much stuff,” DesChene said. The Foodture exhibit shares the bi-level gallery with UMWELT by Ryuta Nakajima, an exhibit comprised of photographs, videos and paintings of Pharaoh cuttlefish. UMWELT is located on the upper level of the Jacobs gallery. Both exhibits will be free to the public until April 11. The gallery is open Tuesday through Thursday 10 a.m. to 6 p.m. and Friday 10 a.m. to 7 p.m. 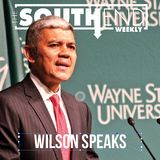