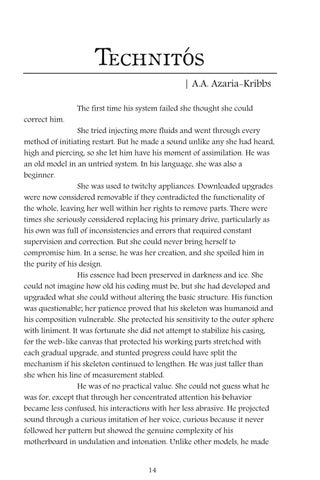 The first time his system failed she thought she could

She tried injecting more fluids and went through every method of initiating restart. But he made a sound unlike any she had heard, high and piercing, so she let him have his moment of assimilation. He was an old model in an untried system. In his language, she was also a beginner. She was used to twitchy appliances. Downloaded upgrades were now considered removable if they contradicted the functionality of the whole, leaving her well within her rights to remove parts. There were times she seriously considered replacing his primary drive, particularly as his own was full of inconsistencies and errors that required constant supervision and correction. But she could never bring herself to compromise him. In a sense, he was her creation, and she spoiled him in the purity of his design. His essence had been preserved in darkness and ice. She could not imagine how old his coding must be, but she had developed and upgraded what she could without altering the basic structure. His function was questionable; her patience proved that his skeleton was humanoid and his composition vulnerable. She protected his sensitivity to the outer sphere with liniment. It was fortunate she did not attempt to stabilize his casing, for the web like canvas that protected his working parts stretched with each gradual upgrade, and stunted progress could have split the mechanism if his skeleton continued to lengthen. He was just taller than she when his line of measurement stabled. He was of no practical value. She could not guess what he was for, except that through her concentrated attention his behavior became less confused, his interactions with her less abrasive. He projected sound through a curious imitation of her voice, curious because it never followed her pattern but showed the genuine complexity of his motherboard in undulation and intonation. Unlike other models, he made 14 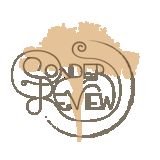