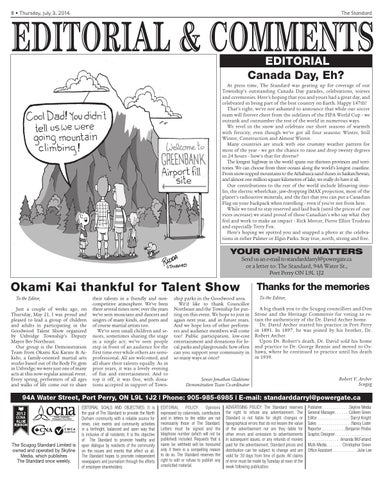 EDITORIAL Canada Day, Eh? At press time, The Standard was gearing up for coverage of our Township’s outstanding Canada Day parades, celebrations, soirees and ceremonies. Here’s hoping that you and yours had a great day, and celebrated in being part of the best country on Earth. Happy 147th! That’s right, we’re not ashamed to announce that while our soccer team will forever cheer from the sidelines of the FIFA World Cup - we outrank and outnumber the rest of the world in numerous ways. We revel in the snow and celebrate our short seasons of warmth with ferocity, even though we’ve got all four seasons: Winter, Still Winter, Construction and Almost Winter. Many countries are stuck with one crummy weather pattern for most of the year - we get the chance to raise and drop twenty degrees in 24 hours - how’s that for diverse? The longest highway in the world spans our thirteen provinces and territories. We can choose from three oceans along the world’s longest coastline. From snow-topped mountains to the Athabasca sand dunes in Saskatchewan, and almost one million square kilometres of lake, we really do have it all. Our contributions to the rest of the world include lifesaving insulin, the electric wheelchair, jaw-dropping IMAX projection, most of the planet’s radioactive minerals, and the fact that you can put a Canadian Flag on your backpack when travelling - even if you’re not from here. While we tend to stay reserved and laid back (until the prices of our vices increase) we stand proud of those Canadian’s who say what they feel and work to make an impact - Rick Mercer, Pierre Elliot Trudeau and especially Terry Fox. Here’s hoping we spotted you and snapped a photo at the celebrations in either Palmer or Elgin Parks. Stay true, north, strong and free.

Your opinion matters Send us an e-mail to standarddarryl@powergate.ca or a letter to: The Standard, 94A Water St., Port Perry ON L9L 1J2

Okami Kai thankful for Talent Show To the Editor, Just a couple of weeks ago, on Thursday, May 21, I was proud and pleased to lead a group of children and adults in participating in the Goodwood Talent Show organized by Uxbridge Township’s Deputy Mayor Bev Northeast. Our group is the Demonstration Team from Okami Kai Karate & Aikido, a family-oriented martial arts studio based out of the Body Fit gym in Uxbridge; we were just one of many acts at this now-regular annual event. Every spring, performers of all ages and walks of life come out to share

their talents in a friendly and noncompetitive atmosphere. We’ve been there several times now; over the years we’ve seen musicians and dancers and singers of many kinds, and poets and of course martial artists too. We’ve seen small children and seniors, sometimes sharing the stage in a single act; we’ve seen people step in front of an audience for the first time ever while others are semiprofessional. All are welcomed, and all share their talents equally. As in prior years, it was a lovely evening of fun and entertainment. And to top it off, it was free, with donations accepted in support of Town-

Thanks for the memories To the Editor,

ship parks in the Goodwood area. We’d like to thank Councillor Northeast and the Township for putting on this event. We hope to join in again next year, and in future years. And we hope lots of other performers and audience members will come too! Public participation, low-cost entertainment and donations for local parks and playgrounds: how often can you support your community in so many ways at once?

A big thank you to the Scugog councillors and Don Stone and the Heritage Committee for voting to retain the authenticity of the Dr. David Archer home. Dr. David Archer started his practice in Port Perry in 1891. In 1897, he was joined by his brother, Dr. Robert Archer. Upon Dr. Robert’s death, Dr. David sold his home and practice to Dr. George Rennie and moved to Oshawa, where he continued to practice until his death in 1939.

The Scugog Standard Limited is owned and operated by Skyline Media, which publishes The Standard once weekly.

EDITORIAL GOALS AND OBJECTIVES: It is the goal of The Standard to provide the North Durham community with a reliable source for news, civic events and community activities in a forthright, balanced and open way that is inclusive of all residents. It is the objective of The Standard to promote healthy and open dialogue by residents of the community on the issues and events that affect us all. The Standard hopes to promote independent newspapers and journalism through the efforts of employee shareholders.

EDITORIAL POLICY: Opinions expressed by columnists, contributors and in letters to the editor are not necessarily those of The Standard. Letters must be signed and the telephone number (which will not be published) included. Requests that a name be withheld will be honoured only if there is a compelling reason to do so. The Standard reserves the right to edit or refuse to publish any unsolicited material.

ADVERTISING POLICY: The Standard reserves the right to refuse any advertisement. The Standard is not liable for slight changes or typographical errors that do not lessen the value of the advertisement nor are they liable for other errors and omissions to advertisements in subsequent issues, or any refunds of monies paid for the advertisement. Standard prices and distribution can be subject to change and are valid for 30 days from time of quote. All claims of error must be made by Tuesday at noon of the week following publication. 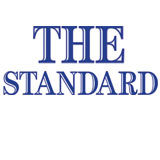