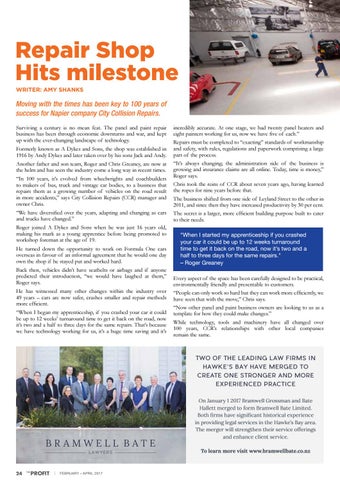 Moving with the times has been key to 100 years of success for Napier company City Collision Repairs. Surviving a century is no mean feat. The panel and paint repair business has been through economic downturns and war, and kept up with the ever-changing landscape of technology. Formerly known as A Dykes and Sons, the shop was established in 1916 by Andy Dykes and later taken over by his sons Jack and Andy. Another father and son team, Roger and Chris Greaney, are now at the helm and has seen the industry come a long way in recent times. “In 100 years, it’s evolved from wheelwrights and coachbuilders to makers of bus, truck and vintage car bodies, to a business that repairs them as a growing number of vehicles on the road result in more accidents,” says City Collision Repairs (CCR) manager and owner Chris. “We have diversified over the years, adapting and changing as cars and trucks have changed.” Roger joined A Dykes and Sons when he was just 16 years old, making his mark as a young apprentice before being promoted to workshop foreman at the age of 19. He turned down the opportunity to work on Formula One cars overseas in favour of an informal agreement that he would one day own the shop if he stayed put and worked hard. Back then, vehicles didn’t have seatbelts or airbags and if anyone predicted their introduction, “we would have laughed at them,” Roger says. He has witnessed many other changes within the industry over 49 years – cars are now safer, crashes smaller and repair methods more efficient. “When I began my apprenticeship, if you crashed your car it could be up to 12 weeks’ turnaround time to get it back on the road, now it’s two and a half to three days for the same repairs. That’s because we have technology working for us, it’s a huge time saving and it’s

incredibly accurate. At one stage, we had twenty panel beaters and eight painters working for us, now we have five of each.” Repairs must be completed to “exacting” standards of workmanship and safety, with rules, regulations and paperwork comprising a large part of the process. “It’s always changing; the administration side of the business is growing and insurance claims are all online. Today, time is money,” Roger says. Chris took the reins of CCR about seven years ago, having learned the ropes for nine years before that. The business shifted from one side of Leyland Street to the other in 2011, and since then they have increased productivity by 30 per cent. The secret is a larger, more efficient building purpose built to cater to their needs. “When I started my apprenticeship if you crashed your car it could be up to 12 weeks turnaround time to get it back on the road, now it’s two and a half to three days for the same repairs." – Roger Greaney Every aspect of the space has been carefully designed to be practical, environmentally friendly and presentable to customers. “People can only work so hard but they can work more efficiently, we have seen that with the move,” Chris says. “Now other panel and paint business owners are looking to us as a template for how they could make changes.” While technology, tools and machinery have all changed over 100 years, CCR’s relationships with other local companies remain the same.

TWO OF THE LEADING LAW FIRMS IN HAWKE’S BAY HAVE MERGED TO CREATE ONE STRONGER AND MORE EXPERIENCED PRACTICE On January 1 2017 Bramwell Grossman and Bate Hallett merged to form Bramwell Bate Limited. Both firms have significant historical experience in providing legal services in the Hawke’s Bay area. The merger will strengthen their service offerings and enhance client service. To learn more visit www.bramwellbate.co.nz 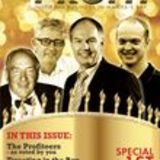 Welcome to the 1st issue of The Profit for 2017. Some awesome stories and interviews with the likes of Mike Toogood, Ben Warren and Viv Bull...

Welcome to the 1st issue of The Profit for 2017. Some awesome stories and interviews with the likes of Mike Toogood, Ben Warren and Viv Bull...