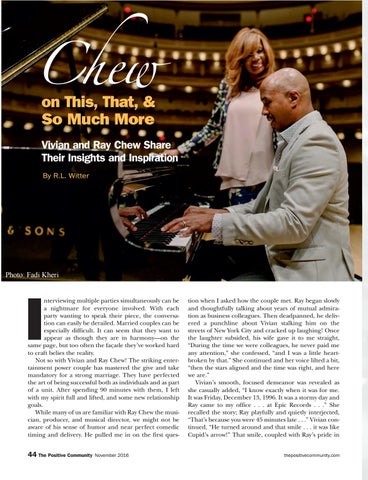 Chew on This, That, &amp; So Much More

Vivian and Ray Chew Share Their Insights and Inspiration By R.L. Witter

nterviewing multiple parties simultaneously can be a nightmare for everyone involved. With each party wanting to speak their piece, the conversation can easily be derailed. Married couples can be especially difficult. It can seem that they want to appear as though they are in harmony—on the same page, but too often the façade they’ve worked hard to craft belies the reality. Not so with Vivian and Ray Chew! The striking entertainment power couple has mastered the give and take mandatory for a strong marriage. They have perfected the art of being successful both as individuals and as part of a unit. After spending 90 minutes with them, I left with my spirit full and lifted, and some new relationship goals. While many of us are familiar with Ray Chew the musician, producer, and musical director, we might not be aware of his sense of humor and near perfect comedic timing and delivery. He pulled me in on the first ques-

tion when I asked how the couple met. Ray began slowly and thoughtfully talking about years of mutual admiration as business colleagues. Then deadpanned, he delivered a punchline about Vivian stalking him on the streets of New York City and cracked up laughing! Once the laughter subsided, his wife gave it to me straight, “During the time we were colleagues, he never paid me any attention,” she confessed, “and I was a little heartbroken by that.” She continued and her voice lilted a bit, “then the stars aligned and the time was right, and here we are.” Vivian’s smooth, focused demeanor was revealed as she casually added, “I know exactly when it was for me. It was Friday, December 13, 1996. It was a stormy day and Ray came to my office . . . at Epic Records . . .” She recalled the story; Ray playfully and quietly interjected, “That’s because you were 45 minutes late . . .” Vivian continued, “He turned around and that smile . . . it was like Cupid’s arrow!” That smile, coupled with Ray’s pride in thepositivecommunity.com 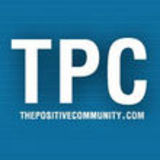