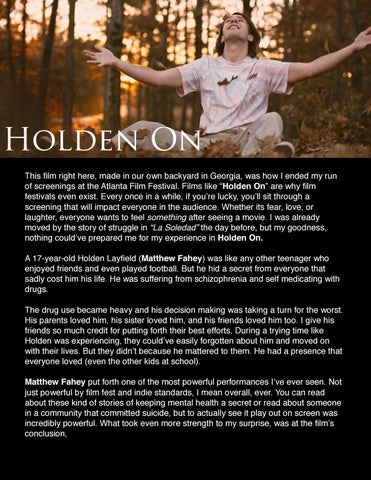 Holden On This film right here, made in our own backyard in Georgia, was how I ended my run of screenings at the Atlanta Film Festival. Films like “Holden On” are why film festivals even exist. Every once in a while, if you’re lucky, you’ll sit through a screening that will impact everyone in the audience. Whether its fear, love, or laughter, everyone wants to feel something after seeing a movie. I was already moved by the story of struggle in “La Soledad” the day before, but my goodness, nothing could’ve prepared me for my experience in Holden On. A 17-year-old Holden Layfield (Matthew Fahey) was like any other teenager who enjoyed friends and even played football. But he hid a secret from everyone that sadly cost him his life. He was suffering from schizophrenia and self medicating with drugs. The drug use became heavy and his decision making was taking a turn for the worst. His parents loved him, his sister loved him, and his friends loved him too. I give his friends so much credit for putting forth their best efforts. During a trying time like Holden was experiencing, they could’ve easily forgotten about him and moved on with their lives. But they didn’t because he mattered to them. He had a presence that everyone loved (even the other kids at school). Matthew Fahey put forth one of the most powerful performances I’ve ever seen. Not just powerful by film fest and indie standards, I mean overall, ever. You can read about these kind of stories of keeping mental health a secret or read about someone in a community that committed suicide, but to actually see it play out on screen was incredibly powerful. What took even more strength to my surprise, was at the film’s conclusion, 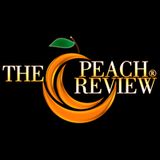 Greetings everyone. We're very happy to present our 19th issue of The Peach Review®. We had to push back the release date by a few weeks for...

Greetings everyone. We're very happy to present our 19th issue of The Peach Review®. We had to push back the release date by a few weeks for...