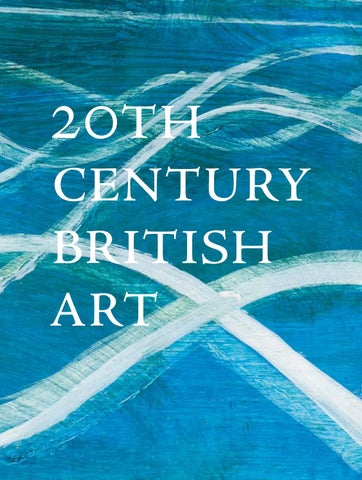 All paintings and sculpture are available for viewing on receipt of this catalogue Please contact the gallery for prices and availability Gallery hours: Monday to Friday 10am â&#x20AC;&#x201C; 6pm Saturdays and other times by appointment

In this fifth annual exhibition of 20th Century British Art at Bury Street, we continue to endorse the prowess of a number of artists long associated with Paisnel Gallery, a few of whom are still living and working. Modern masters Alan Davie and Martin Bradley, with their intuitive and symbolic slant on abstraction, feature prominently as befits their increasing profiles. The enduring interest in the St Ives movement is satisfied by a broad range of work by Michael Canney, Patrick Heron, John Wells, Peter Lanyon, and of course, Terry Frost. To iconic sculpture by Denis Mitchell and Brian Wall, we have added the artist Breon Oâ&#x20AC;&#x2122;Casey, sadly recently deceased, who we now represent solely in London, and the perceptive flair of Deborah van der Beek for whom we are now the principal dealers.

Painted shortly after Hitchens settled permanently at the studio and home in Sussex that came to be known as Greenleaves, The Courtyard is a typically constructed rectangular composition; as Hitchens said, “dark-light, warmcool, up-down, circular shapes and square angular shapes” all combine to create his belief that his paintings should be “listened to”.

Harbour Scene, Penzance, although undated, bears a strong resemblance to Eurich’s coastal and maritime paintings of the late 1930s, for example Moored Boats (1938) in the Government Art Collection and Porthleven, Cornwall (1937) in the collection of the National Gallery of Victoria. The germ of the design in Harbour Scene, Penzance clearly lies with the fishing vessel pz18 and the nearby pz12. The painting is in the modern idiom in the sense that it has no horizon and the boats in the foreground seem to rear up towards the elevated viewpoint of the artist. The quayside forms a pseudo-horizon, while the large vessel moored nearby is cropped in the style of Degas. The strong colours lend as much balance to the painting as the composition itself. Text kindly provided by Christine Clearkin.

Later works by this close contemporary of L S Lowry moved away from gritty industrial landscapes to interiors and still life paintings with Fauve tendencies where importance of strong colour and painterly application was placed above representational values. Majorâ&#x20AC;&#x2122;s dislike for the commercial gallery market resulted in a substantial body of work being retained, enabling a comprehensive retrospective at the Salford Museum and Art Gallery in 2003.

Wolfe travelled extensively throughout his life and in the 1950s he painted scenes in Italy, France, South Africa and Spain. San Feliu is a busy port in the heart of the Costa Brava in Catalunya.

Vaughan spent much of his life in and around West Hampstead. He shared a flat with John Minton in St John’s Wood for six years where he made a series of drawings of the area. The works were not intended to be a record of particular houses but more an observation of the changes to the locality by the opposing forces of development and neglect. The Tate Gallery acquired Demolished Houses in St John’s Wood, no 2 in 1955.

Southwold II bears all the hallmarks of a design for stained glass with translucent colours bordered by dark linear forms. Piper made numerous trips to Suffolk to paint and draw churches and produce designs for glass, notably the John Benjamin Memorial Window (1979) at Aldeburgh.

The latter years of the 1950s were important for Canney when he came under the influence of Lanyon and Hilton. Although increasingly abstract, Canney’s work from this period still referenced local landscape in subdued colour. Titles such as Newlyn, Roofs & Sea and Paul, Penzance formed part of a considerable body of work with Natural Arch which pre-dated his more recognisable geometric compositions.

A classic example of the loosely painted small scale studies produced when Wells was at the Anchor Studio, Newlyn in the late 1950s. Landscape explores weathered textures and colours where surfaces are scratched and dragged over gesso prepared board. The supporting board was cut and painted by Wells and is intended to be part of the painting.

Heron’s gouaches from the 1980s exude a softness and fluidity which characterise his work from this period. Heron insisted that his gouaches were works in their own right and not preliminary sketches for later paintings on canvas. January 1, 1983 (a date suggestive of new beginnings) was one of a series which reflects the tranquillity of the gardens surrounding his house in Cornwall, Eagles Nest.

Barns-Grahamâ&#x20AC;&#x2122;s fascination with the ocean can be traced throughout her artistic career. From the early drawings of St Ives through to Atlantic Squall (Kirkcaldy Art Gallery and Museum) and Full Tide (Robert Adams Collection) of the 1970s, she depicted the volatile nature of the sea with increasingly linear simplicity. Eight Lines, Porthmeor (1986) is in the permanent collection of the Tate Gallery.

Painted at a time when Lanyon’s outlook on the world had broadened following travels to America, Untitled 1963 relates to several gouaches with the same colour reduction and gestural structure; Dawn Wave 1962 and Grass Wind 1961 are notably similar compositions.

Avray Wilson frequently painted on unusually shaped boards. These three panels originally intended as individual compositions have been combined to epitomise his explosive images drawing on the fissional properties of a material cosmos.

The year 1955 was a progressive one for Davie both in terms of the volume of work and the recognition achieved. Five versions of Bull God were produced as well as a number of other significant paintings including Birth of Venus (Tate Gallery) and Magic Box (Museum of Modern Art, New York) which endorsed Davie’s emergence as a leading British artist.

Another example of Flag Walk is held by the Government Art Collection and was installed in Buenos Aires at the Ambassadorâ&#x20AC;&#x2122;s Residence in 2004. It was chosen as part of a group of art with links to broader South American themes. Inspired by Davieâ&#x20AC;&#x2122;s visits to the Caribbean, its geometric forms refer to the prehistoric petroglyphs of St Lucia, the island which he visited regularly for many years.

The tigerâ&#x20AC;&#x2122;s tail was a recurring motif throughout Davieâ&#x20AC;&#x2122;s work from the 1960s. Compositionally similar to Tiger is Joyful (Paisnel Gallery Post-War and St Ives November 2009, cat no 13), it reflects a lighter and more optimistic mood than the more sombre paintings of the previous decade.

The year 1955 was a pivotal point in Bradley’s career, with two successful exhibitions at the Redfern Gallery and Piccadilly Gallery. In London he became acquainted with the writers John Osborne, Harold Pinter and Bill Hopkins known as the “angry young men”. A year later he signed a contract with Gallery One and continued to show paintings with strong calligraphic and symbolic images through the 1950s and 1960s.

A classic in Bradley’s oeuvre, Seer reveals a figurative presence in subdued palette with fewer of his characteristic emblems or symbols. 1959 was a very successful year in Bradley’s career with international recognition from exhibitions at Wittenborn Gallery in New York and Galerie Barcinsky in Rio de Janeiro.

Painted whilst Hoyland was Principal Lecturer at Chelsea School of Art, Untitled 1969 is a typically rich and pure abstract built up from almost voluptuous layers of paint. It pre-empts his experimentation of the 1970s with varied and tactile surfaces where the paint has been poured, splattered and worked with brush and palette knife.

Although originally a figurative painter with a studio in Newlyn, Chapman chose the path of abstraction in the early Post-War years and by the 1960s was fully engaged in experimentation with collage techniques including “papier colle”, initially conceived by Braque. He exhibited with the avant-garde London galleries, Grabowski and New Vision Centre and produced a body of work that was quite unique in its physical construction.

Painted in the same year that Sandra Blow was showing at the Tate St Ives, Wave Sequence is typically muted in colour as with other of the Porthmeor Series and reflects tones from the beach rather than the countryside. The use of raw wood collage suggests driftwood on the sand ridges left by the tide.

Almost two decades after Terry Frost first used quadrants to simulate boats in his “Walk Along the Quay” series, he was still experimenting with the similar shapes found in Blue Forms. These structures create rhythms which enhance the movement of colour over the canvas and captivate the observer. Colour was now Frost’s primary motivation.

Canney worked on a considerable number of asymmetrical paintings in his later years using both alkyd and oil. The former gave him the benefit of a rapid drying medium for precision, the latter still allowing depth of texture and surface. Pink Edgefold is an iconic composition with a keen understanding of geometry and balance.

Brian Wall moved from St Ives to London in 1960 and, influenced by the Situation Exhibition, began to produce large scale works. His solo show at the Drian Gallery in 1961 and Paris Biennale indicated the advent of the curve in his compositions. One Curve was primary in a series that focused on Wallâ&#x20AC;&#x2122;s increasing interest and command of balance and cantilever.

Standing Figure was one of a series of works exhibited at Waddington Galleries in 1965. The muscular torso is exaggerated by the diminished scale of the head and arms. Whilst there is much in common with the figures of Giacometti, Clatworthy has his own uncompromising language which borders on abstraction. The first comprehensive study of this underrated artist is due for publication in 2012.

The inspirations for Paul Mount’s sculpture were numerous and varied. Sails were appropriate for Spirit of Bristol, a five metre high steel piece commissioned by Bristol City Council in the late 1960s. Although essentially angular, sculptures were also conceived in relation to landscape and more recently toward the representation of figures. Nest was commissioned in 2007 and is probably one of the last works cast in his lifetime.

Deborah van der Beek produced her first sculpture in 1999 with a mature artistic vision and an intrinsic flair for the medium. Peter Davies wrote, â&#x20AC;&#x153;her sculpture stands out for its compelling mixture of potent thematic content and brisk expressive handling of formâ&#x20AC;?. She excels at the portrayal of animals and Rolling Horse clearly illustrates her understanding of, and affection for, equine anatomy. .

Breon O’Casey’s sculpture reflects his enduring interest in primitive culture and folk art. Both simplified in form and monumental in stature, Dublin Bird was conceived in Cornwall but cast in Ireland; a pertinent fusion of creative backgrounds for an artist who had strong associations with both Celtic-based communities.

Paisnel Gallery 9 Bury Street St Jamesâ&#x20AC;&#x2122;s London sw1y 6ab Telephone: 020 7930 9293 Email: info@paisnelgallery.co.uk www.paisnelgallery.co.uk ÂŠ Paisnel Gallery All rights reserved. No part of this publication may be reproduced, stored in a retrieval system or transmitted in any form or by any means without first seeking the written permission of the copyright holders and of the publisher. Photography: Paul Tucker Photography Design: Alan Ward @ www.axisgraphicdesign.co.uk Print: DeckersSnoeck, Antwerp 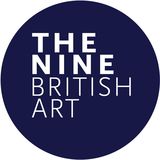