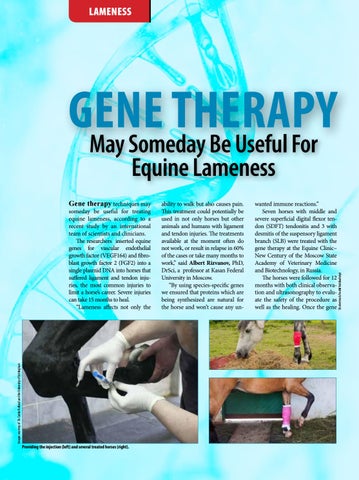 GENE THERAPY May Someday Be Useful For

Images courtesy of Dr. Catrin Rutland and the University of Nottingham

Gene therapy techniques may someday be useful for treating equine lameness, according to a recent study by an international team of scientists and clinicians. The researchers inserted equine genes for vascular endothelial growth factor (VEGF164) and fibroblast growth factor 2 (FGF2) into a single plasmid DNA into horses that suffered ligament and tendon injuries, the most common injuries to limit a horse’s career. Severe injuries can take 15 months to heal. “Lameness affects not only the

ability to walk but also causes pain. This treatment could potentially be used in not only horses but other animals and humans with ligament and tendon injuries. The treatments available at the moment often do not work, or result in relapse in 60% of the cases or take many months to work,” said Albert Rizvanov, PhD, DrSci, a professor at Kasan Federal University in Moscow. “By using species-specific genes we ensured that proteins which are being synthesized are natural for the horse and won’t cause any un-

wanted immune reactions.” Seven horses with middle and severe superficial digital flexor tendon (SDFT) tendonitis and 3 with desmitis of the suspensory ligament branch (SLB) were treated with the gene therapy at the Equine Clinic– New Century of the Moscow State Academy of Veterinary Medicine and Biotechnology, in Russia. The horses were followed for 12 months with both clinical observation and ultrasonography to evaluate the safety of the procedure as well as the healing. Once the gene More from The Modern Equine Vet