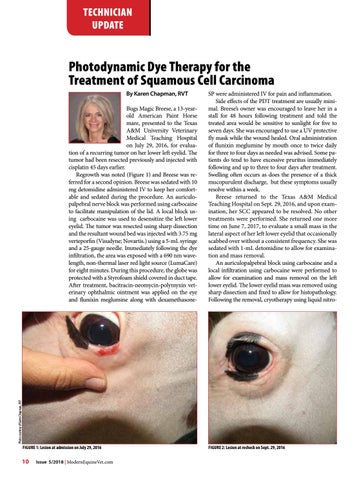 Bugs Magic Breese, a 13-yearold American Paint Horse mare, presented to the Texas A&M University Veterinary Medical Teaching Hospital on July 29, 2016, for evaluation of a recurring tumor on her lower left eyelid. The tumor had been resected previously and injected with cisplatin 45 days earlier. Regrowth was noted (Figure 1) and Breese was referred for a second opinion. Breese was sedated with 10 mg detomidine administered IV to keep her comfortable and sedated during the procedure. An auriculopalpebral nerve block was performed using carbocaine to facilitate manipulation of the lid. A local block using carbocaine was used to desensitize the left lower eyelid. The tumor was resected using sharp dissection and the resultant wound bed was injected with 3.75 mg verteporfin (Visudyne; Novartis.) using a 5-mL syringe and a 25-gauge needle. Immediately following the dye infiltration, the area was exposed with a 690 nm wavelength, non-thermal laser red light source (LumaCare) for eight minutes. During this procedure, the globe was protected with a Styrofoam shield covered in duct tape. After treatment, bacitracin-neomycin-polymyxin veterinary ophthalmic ointment was applied on the eye and flunixin meglumine along with dexamethasone-

SP were administered IV for pain and inflammation. Side effects of the PDT treatment are usually minimal. Breeseâ&#x20AC;&#x2122;s owner was encouraged to leave her in a stall for 48 hours following treatment and told the treated area would be sensitive to sunlight for five to seven days. She was encouraged to use a UV protective fly mask while the wound healed. Oral administration of flunixin meglumine by mouth once to twice daily for three to four days as needed was advised. Some patients do tend to have excessive pruritus immediately following and up to three to four days after treatment. Swelling often occurs as does the presence of a thick mucopurulent discharge, but these symptoms usually resolve within a week. Breese returned to the Texas A&M Medical Teaching Hospital on Sept. 29, 2016, and upon examination, her SCC appeared to be resolved. No other treatments were performed. She returned one more time on June 7, 2017, to evaluate a small mass in the lateral aspect of her left lower eyelid that occasionally scabbed over without a consistent frequency. She was sedated with 1-mL detomidine to allow for examination and mass removal. An auriculopalpebral block using carbocaine and a local infiltration using carbocaine were performed to allow for examination and mass removal on the left lower eyelid. The lower eyelid mass was removed using sharp dissection and fixed to allow for histopathology. Following the removal, cryotherapy using liquid nitro- The Modern Equine Vet May 2018

The Modern Equine Vet May 2018