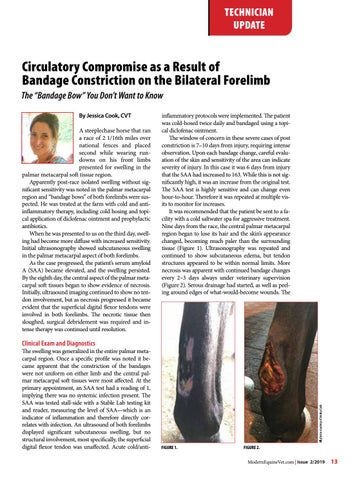 Circulatory Compromise as a Result of Bandage Constriction on the Bilateral Forelimb The “Bandage Bow” You Don’t Want to Know By Jessica Cook, CVT A steeplechase horse that ran a race of 2 1/16th miles over national fences and placed second while wearing rundowns on his front limbs presented for swelling in the palmar metacarpal soft tissue region. Apparently post-race isolated swelling without significant sensitivity was noted in the palmar metacarpal region and “bandage bows” of both forelimbs were suspected. He was treated at the farm with cold and antiinflammatory therapy, including cold hosing and topical application of diclofenac ointment and prophylactic antibiotics. When he was presented to us on the third day, swelling had become more diffuse with increased sensitivity. Initial ultrasonography showed subcutaneous swelling in the palmar metacarpal aspect of both forelimbs. As the case progressed, the patient’s serum amyloid A (SAA) became elevated, and the swelling persisted. By the eighth day, the central aspect of the palmar metacarpal soft tissues began to show evidence of necrosis. Initially, ultrasound imaging continued to show no tendon involvement, but as necrosis progressed it became evident that the superficial digital flexor tendons were involved in both forelimbs. The necrotic tissue then sloughed, surgical debridement was required and intense therapy was continued until resolution.

inflammatory protocols were implemented. The patient was cold-hosed twice daily and bandaged using a topical diclofenac ointment. The window of concern in these severe cases of post constriction is 7–10 days from injury, requiring intense observation. Upon each bandage change, careful evaluation of the skin and sensitivity of the area can indicate severity of injury. In this case it was 6 days from injury that the SAA had increased to 163. While this is not significantly high, it was an increase from the original test. The SAA test is highly sensitive and can change even hour-to-hour. Therefore it was repeated at multiple visits to monitor for increases. It was recommended that the patient be sent to a facility with a cold saltwater spa for aggressive treatment. Nine days from the race, the central palmar metacarpal region began to lose its hair and the skin’s appearance changed, becoming much paler than the surrounding tissue (Figure 1). Ultrasonography was repeated and continued to show subcutaneous edema, but tendon structures appeared to be within normal limits. More necrosis was apparent with continued bandage changes every 2–3 days always under veterinary supervision (Figure 2). Serous drainage had started, as well as peeling around edges of what-would-become wounds. The

The swelling was generalized in the entire palmar metacarpal region. Once a specific profile was noted it became apparent that the constriction of the bandages were not uniform on either limb and the central palmar metacarpal soft tissues were most affected. At the primary appointment, an SAA test had a reading of 1, implying there was no systemic infection present. The SAA was tested stall-side with a Stable Lab testing kit and reader, measuring the level of SAA—which is an indicator of inflammation and therefore directly correlates with infection. An ultrasound of both forelimbs displayed significant subcutaneous swelling, but no structural involvement, most specifically, the superficial digital flexor tendon was unaffected. Acute cold/anti-

All photos courtesy of Jessica Cook