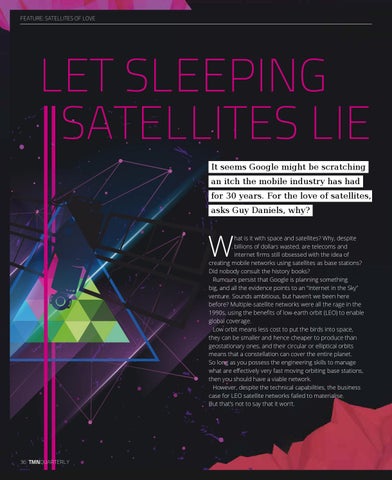 LET SLEEPING SATELLITES LIE It seems Google might be scratching an itch the mobile industry has had for 30 years. For the love of satellites, asks Guy Daniels, why?

hat is it with space and satellites? Why, despite billions of dollars wasted, are telecoms and internet firms still obsessed with the idea of creating mobile networks using satellites as base stations? Did nobody consult the history books? Rumours persist that Google is planning something big, and all the evidence points to an “Internet in the Sky” venture. Sounds ambitious, but haven’t we been here before? Multiple-satellite networks were all the rage in the 1990s, using the benefits of low-earth orbit (LEO) to enable global coverage. Low orbit means less cost to put the birds into space, they can be smaller and hence cheaper to produce than geostationary ones, and their circular or elliptical orbits means that a constellation can cover the entire planet. So long as you possess the engineering skills to manage what are effectively very fast moving orbiting base stations, then you should have a viable network. However, despite the technical capabilities, the business case for LEO satellite networks failed to materialise. But that’s not to say that it won’t. 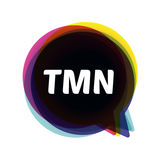 Issue 07 includes features on next generation radio access technology, on building the future mobile video distribution network, and on mobi...

Issue 07 includes features on next generation radio access technology, on building the future mobile video distribution network, and on mobi...