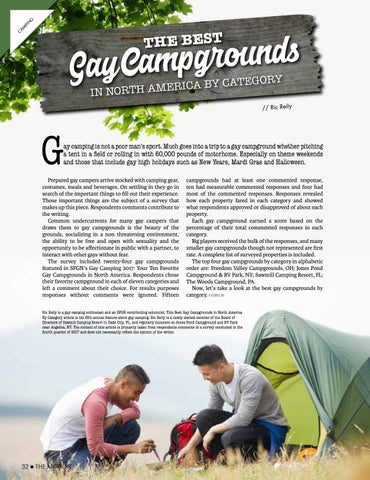 ay camping is not a poor man&#39;s sport. Much goes into a trip to a gay campground whether pitching a tent in a field or rolling in with 60,000 pounds of motorhome. Especially on theme weekends and those that include gay high holidays such as New Years, Mardi Gras and Halloween.

Prepared gay campers arrive stocked with camping gear, costumes, meals and beverages. On settling in they go in search of the important things to fill out their experience. Those important things are the subject of a survey that makes up this piece. Respondents comments contribute to the writing. Common undercurrents for many gay campers that draws them to gay campgrounds is the beauty of the grounds, socializing in a non threatening environment, the ability to be free and open with sexuality and the opportunity to be affectionate in public with a partner, to interact with other gays without fear. The survey included twenty-four gay campgrounds featured in SFGN&#39;s Gay Camping 2017: Your Ten Favorite Gay Campgrounds in North America. Respondents chose their favorite campground in each of eleven categories and left a comment about their choice. For results purposes responses without comments were ignored. Fifteen

Ric Reily is a gay camping enthusiast and an SFGN contributing columnist. This Best Gay Campgrounds in North America By Category article is his fifth annual feature about gay camping. Ric Reily is a newly elected member of the Board of Directors of Sawmill Camping Resort in Dade City, FL, and regularly summers at Jones Pond Campground and RV Park near Angelica, NY. The content of this article is primarily taken from respondents comments to a survey conducted in the fourth quarter of 2017 and does not necessarily reflect the opinion of the writer. 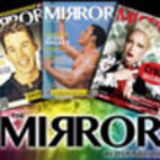