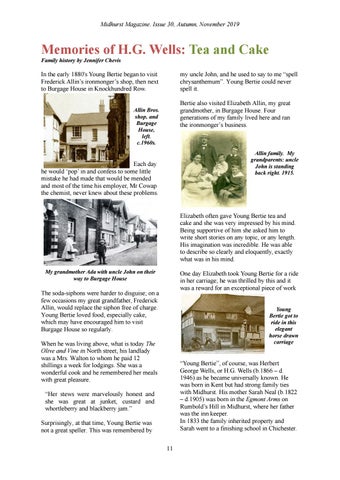 In the early 1880's Young Bertie began to visit Frederick Allin’s ironmonger’s shop, then next to Burgage House in Knockhundred Row.

my uncle John, and he used to say to me “spell chrysanthemum”. Young Bertie could never spell it. Bertie also visited Elizabeth Allin, my great grandmother, in Burgage House. Four generations of my family lived here and ran the ironmonger’s business.

Allin family. My grandparents: uncle John is standing back right. 1915.

Each day he would ‘pop’ in and confess to some little mistake he had made that would be mended and most of the time his employer, Mr Cowap the chemist, never knew about these problems.

Elizabeth often gave Young Bertie tea and cake and she was very impressed by his mind. Being supportive of him she asked him to write short stories on any topic, or any length. His imagination was incredible. He was able to describe so clearly and eloquently, exactly what was in his mind. My grandmother Ada with uncle John on their way to Burgage House

One day Elizabeth took Young Bertie for a ride in her carriage; he was thrilled by this and it was a reward for an exceptional piece of work

The soda-siphons were harder to disguise; on a few occasions my great grandfather, Frederick Allin, would replace the siphon free of charge. Young Bertie loved food, especially cake, which may have encouraged him to visit Burgage House so regularly.

Young Bertie got to ride in this elegant horse drawn carriage

When he was living above, what is today The Olive and Vine in North street, his landlady was a Mrs. Walton to whom he paid 12 shillings a week for lodgings. She was a wonderful cook and he remembered her meals with great pleasure.

“Young Bertie”, of course, was Herbert George Wells, or H.G. Wells (b.1866 – d. 1946) as he became universally known. He was born in Kent but had strong family ties with Midhurst. His mother Sarah Neal (b.1822 – d.1905) was born in the Egmont Arms on Rumbold’s Hill in Midhurst, where her father was the inn keeper. In 1833 the family inherited property and Sarah went to a finishing school in Chichester.

“Her stews were marvelously honest and she was great at junket, custard and whortleberry and blackberry jam.” Surprisingly, at that time, Young Bertie was not a great speller. This was remembered by 11 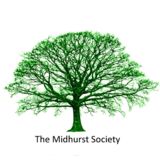 The Autumn 2019 Issue of the Midhurst Magazine (No. 30) features articles on the Park House Hotel, Archery in Midhurst; and the shipwreck-hu...

The Autumn 2019 Issue of the Midhurst Magazine (No. 30) features articles on the Park House Hotel, Archery in Midhurst; and the shipwreck-hu...