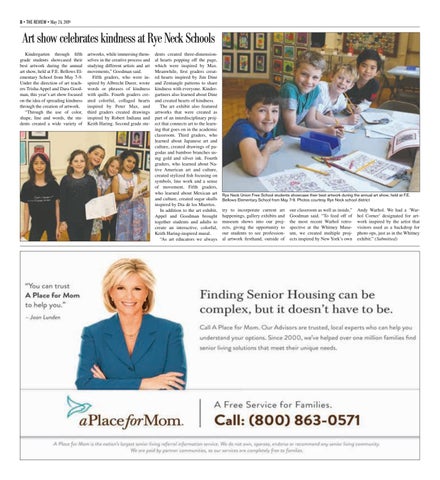 Art show celebrates kindness at Rye Neck Schools Kindergarten through fifth grade students showcased their best artwork during the annual art show, held at F.E. Bellows Elementary School from May 7-9. Under the direction of art teachers Trisha Appel and Dara Goodman, this year’s art show focused on the idea of spreading kindness through the creation of artwork. “Through the use of color, shape, line and words, the students created a wide variety of

dents created three-dimensional hearts popping off the page, which were inspired by Max. Meanwhile, first graders created hearts inspired by Jim Dine and Zentangle patterns to share kindness with everyone. Kindergartners also learned about Dine and created hearts of kindness. The art exhibit also featured artworks that were created as part of an interdisciplinary project that connects art to the learning that goes on in the academic classroom. Third graders, who learned about Japanese art and culture, created drawings of pagodas and bamboo branches using gold and silver ink. Fourth graders, who learned about Native American art and culture, created stylized fish focusing on symbols, line work and a sense of movement. Fifth graders, who learned about Mexican art and culture, created sugar skulls inspired by Dia de los Muertos. In addition to the art exhibit, Appel and Goodman brought together students and adults to create an interactive, colorful, Keith Haring-inspired mural. “As art educators we always

try to incorporate current art happenings, gallery exhibits and museum shows into our projects, giving the opportunity to our students to see professional artwork firsthand, outside of

our classroom as well as inside,” Goodman said. “To feed off of the most recent Warhol retrospective at the Whitney Museum, we created multiple projects inspired by New York’s own

Andy Warhol. We had a ‘Warhol Corner’ designated for artwork inspired by the artist that visitors used as a backdrop for photo ops, just as in the Whitney exhibit.” (Submitted) 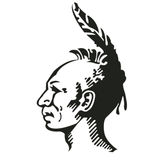