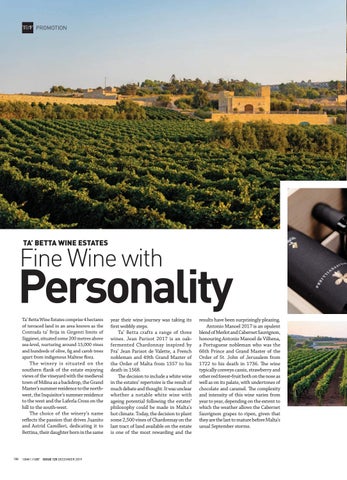 Personality Ta’ Betta Wine Estates comprise 4 hectares of terraced land in an area known as the Contrada ta’ Brija in Girgenti limits of Siggiewi, situated some 200 metres above sea-level, nurturing around 15,000 vines and hundreds of olive, fig and carob trees apart from indigenous Maltese flora.

The winery is situated on the southern flank of the estate enjoying views of the vineyard with the medieval town of Mdina as a backdrop, the Grand Master’s summer residence to the northwest, the Inquisitor’s summer residence to the west and the Laferla Cross on the hill to the south-west. The choice of the winery’s name reflects the passion that drives Juanito and Astrid Camilleri, dedicating it to Bettina, their daughter born in the same

year their wine journey was taking its first wobbly steps. Ta’ Betta crafts a range of three wines. Jean Parisot 2017 is an oakfermented Chardonnay inspired by Fra’ Jean Parisot de Valette, a French nobleman and 49th Grand Master of the Order of Malta from 1557 to his death in 1568. The decision to include a white wine in the estates’ repertoire is the result of much debate and thought. It was unclear whether a notable white wine with ageing potential following the estates’ philosophy could be made in Malta’s hot climate. Today, the decision to plant some 2,500 vines of Chardonnay on the last tract of land available on the estate is one of the most rewarding and the

results have been surprisingly pleasing. Antonio Manoel 2017 is an opulent blend of Merlot and Cabernet Sauvignon, honouring Antonio Manoel de Vilhena, a Portuguese nobleman who was the 66th Prince and Grand Master of the Order of St. John of Jerusalem from 1722 to his death in 1736. The wine typically conveys cassis, strawberry and other red forest-fruit both on the nose as well as on its palate, with undertones of chocolate and caramel. The complexity and intensity of this wine varies from year to year, depending on the extent to which the weather allows the Cabernet Sauvignon grapes to ripen, given that they are the last to mature before Malta’s usual September storms. 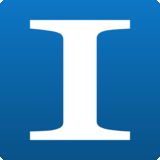