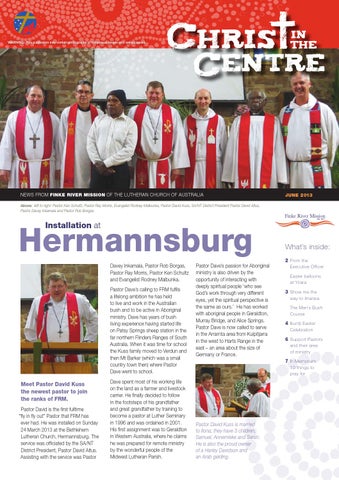 WARNING: This publication may contain photographs of Indigenous people who are deceased.

Hermannsburg Davey Inkamala, Pastor Rob Borgas, Pastor Ray Morris, Pastor Ken Schultz and Evangelist Rodney Malbunka. Pastor Dave’s calling to FRM fulfils a lifelong ambition he has held to live and work in the Australian bush and to be active in Aboriginal ministry. Dave has years of bush living experience having started life on Patsy Springs sheep station in the far northern Flinders Ranges of South Australia. When it was time for school the Kuss family moved to Verdun and then Mt Barker (which was a small country town then) where Pastor Dave went to school.

Meet Pastor David Kuss the newest pastor to join the ranks of FRM. Pastor David is the first fulltime “fly in fly out” Pastor that FRM has ever had. He was installed on Sunday 24 March 2013 at the Bethlehem Lutheran Church, Hermannsburg. The service was officiated by the SA/NT District President, Pastor David Altus. Assisting with the service was Pastor

Dave spent most of his working life on the land as a farmer and livestock carrier. He finally decided to follow in the footsteps of his grandfather and great grandfather by training to become a pastor at Luther Seminary in 1996 and was ordained in 2001. His first assignment was to Geraldton in Western Australia, where he claims he was prepared for remote ministry by the wonderful people of the Midwest Lutheran Parish.

Pastor Dave’s passion for Aboriginal ministry is also driven by the opportunity of interacting with deeply spiritual people ‘who see God’s work through very different eyes, yet the spiritual perspective is the same as ours.’ He has worked with aboriginal people in Geraldton, Murray Bridge, and Alice Springs. Pastor Dave is now called to serve in the Arrarnta area from Kulpitjarra in the west to Harts Range in the east – an area about the size of Germany or France.

What’s inside: 2 From the Executive Officer Easter balloons at Yirara 3 Show me the way to Imanpa The Men’s Bush Course 4 Ikuntji Easter Celebration 6 Support Pastors and their area of ministry 7 In Memoriam 10 things to pray for

Pastor David Kuss is married to Ilona; they have 3 children, Samuel, Annemieke and Sarah. He is also the proud owner of a Harley Davidson and an Arab gelding. 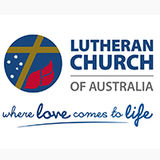 CHRIST IN THE CENTRE Winter 2013

News from Finke Fiver Mission of the Lutheran Church of Australia

CHRIST IN THE CENTRE Winter 2013

News from Finke Fiver Mission of the Lutheran Church of Australia