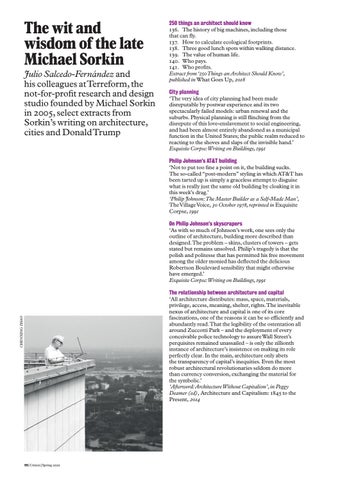 The wit and wisdom of the late Michael Sorkin Julio Salcedo-Fernández and his colleagues at Terreform, the not-for-profit research and design studio founded by Michael Sorkin in 2005, select extracts from Sorkin’s writing on architecture, cities and Donald Trump

250 things an architect should know 136. The history of big machines, including those that can fly. 137. How to calculate ecological footprints. 138. Three good lunch spots within walking distance. 139. The value of human life. 140. Who pays. 141. Who profits. Extract from ‘250 Things an Architect Should Know’, published in What Goes Up, 2018 City planning ‘The very idea of city planning had been made disreputable by postwar experience and its two spectacularly failed models: urban renewal and the suburbs. Physical planning is still flinching from the disrepute of this love-enslavement to social engineering, and had been almost entirely abandoned as a municipal function in the United States; the public realm reduced to reacting to the shoves and slaps of the invisible hand.’ Exquisite Corpse:Writing on Buildings, 1991 Philip Johnson’s AT&amp;T building ‘Not to put too fine a point on it, the building sucks. The so-called “post-modern” styling in which AT&amp;T has been tarted up is simply a graceless attempt to disguise what is really just the same old building by cloaking it in this week’s drag.’ ‘Philip Johnson: The Master Builder as a Self-Made Man’, The Village Voice, 30 October 1978, reprinted in Exquisite Corpse, 1991

On Philip Johnson’s skyscrapers ‘As with so much of Johnson’s work, one sees only the outline of architecture, building more described than designed. The problem – skins, clusters of towers – gets stated but remains unsolved. Philip’s tragedy is that the polish and politesse that has permitted his free movement among the older monied has deflected the delicious Robertson Boulevard sensibility that might otherwise have emerged.’ Exquisite Corpse:Writing on Buildings, 1991 The relationship between architecture and capital ‘All architecture distributes: mass, space, materials, privilege, access, meaning, shelter, rights. The inevitable nexus of architecture and capital is one of its core fascinations, one of the reasons it can be so efficiently and abundantly read. That the legibility of the ostentation all around Zuccotti Park – and the deployment of every conceivable police technology to assure Wall Street’s perquisites remained unassailed – is only the zillionth instance of architecture’s insistence on making its role perfectly clear. In the main, architecture only abets the transparency of capital’s inequities. Even the most robust architectural revolutionaries seldom do more than currency conversion, exchanging the material for the symbolic.’ ‘Afterword: Architecture Without Capitalism’, in Peggy Deamer (ed), Architecture and Capitalism: 1845 to the Present, 2014

The Spring 2020 issue of Citizen showcases proposals to transform the contemporary city, discusses the potential for co-ordinated collective action against both COVID-19 and climate change and explores the power of capital and ethical investment to transform citizens’ lives. Incisive criticism and commentary is complemented by specially commissioned photography by Freddie Ardley, original poetry by LionHeart and illustrations by Thomas Demand. 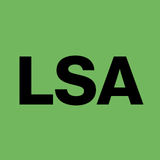 The London School of Architecture