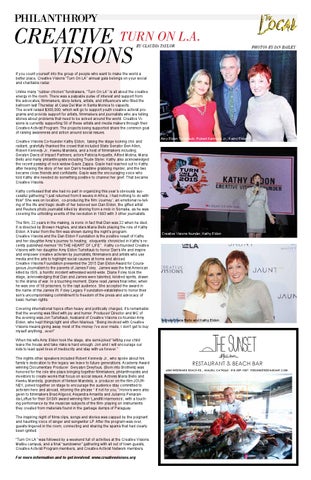 If you count yourself into the group of people who want to make the world a better place, Creative Visions “Turn On LA” annual gala belongs on your social and charitable radar. Unlike many “rubber chicken” fundraisers, “Turn On LA” is all about the creative energy in the room. There was a palpable pulse of interest and support from the advocates, filmmakers, story-tellers, artists, and influencers who filled the ballroom last Thursday at Casa Del Mar in Santa Monica to capacity. The event raised $300,000, which will go to support youth creative activist programs and provide support for artists, filmmakers and journalists who are telling stories about problems that need to be solved around the world. Creative Visions is currently supporting 50 of these artists and media makers through their Creative Activist Program. The projects being supported share the common goal of raising awareness and action around social issues. Creative Visions Co-founder Kathy Eldon, taking the stage looking chic and radiant, gratefully thanked the crowd that included State Senator Ben Allen, Robert Kennedy Jr., Kweku Mandela, and a host of filmmakers including; Geralyn Davis of Impact Partners; actors Patricia Arquette, Alfred Molina, Maria Bello and many philanthropists including Trude Styler. Kathy also acknowledged the recent passing of rock widow Gayle Zappa. Gayle had reached out to Kathy after hearing the story of her son Dan’s headline grabbing murder, and the two became close friends and confidants. Gayle was the encouraging voice who told Kathy she needed do something positive to channel her grief. That became Creative Visions.

Kathy confessed that she had no part in organizing this year’s obviously successful gathering.“I just returned from 8 weeks in Africa, I had nothing to do with this!” She was on location, co-producing the film ‘Journey’, an emotional re-telling of the life and tragic death of her beloved son Dan Eldon, the gifted artist and Reuters photo journalist killed by stoning from a mob in Somalia, as he was covering the unfolding events of the revolution in 1993 with 3 other journalists. The film, 22 years in the making, is ironic in fact that Dan was 22 when he died. It is directed by Browyn Hughes, and stars Maria Bello playing the role of Kathy Eldon. A trailer from the film was shown during the night’s program. Creative Visions and the Dan Eldon Foundation is the positive result of Kathy and her daughter Amy’s journey to healing, eloquently chronicled in Kathy’s recently published memoir “IN THE HEART OF LIFE”. Kathy co-founded Creative Visions with her daughter Amy Eldon Turteltaub to honor Dan’s life and inspire and empower creative activism by journalists, filmmakers and artists who use media and the arts to highlight social causes at home and abroad. Creative Visions Foundation presented the 2015 Dan Eldon Award for Courageous Journalism to the parents of James Foley. James was the first American killed by ISIS, a horrific incident witnessed world-wide. Diane Foley took the stage, acknowledging that Dan and James were talented, kindred spirits, drawn to the drama of war. In a touching moment, Diane read James final letter, when he was one of 18 prisoners, to the rapt audience. She accepted the award in the name of the James W. Foley Legacy Foundation-established to honor their son’s uncompromising commitment to freedom of the press and advocacy of basic human rights. Covering international topics often heavy and politically charged, it’s remarkable that the evening was filled with joy and humor. Producer/ Director and MC of the evening was Jon Turteltaub, husband of Creative Visions co-founder Amy Eldon, who kept things light and often hilarious. “Being involved with Creative Visions means giving away most of the money I’ve ever made. I don’t get to buy myself anything...ever!”

When his wife Amy Eldon took the stage, she semi-joked “letting your child leave the house and take risks is hard enough. Jon and I will encourage our kids to lead quiet lives of mediocrity and stay with us forever.” The nights other speakers included Robert Kennedy Jr., who spoke about his family’s dedication to the legacy we leave to future generations. Academy Award winning Documentary Producer Geryalyn Dreyfous, (Born into Brothels) was honored for the role she plays bringing together filmmakers, philanthropists and investors to create works that focus on social issues. Actress Maria Bello and Kweku Mandela, grandson of Nelson Mandela, a producer on the film JOURNEY, joined together on stage to encourage the audience stay committed to activism here and abroad, intoning the phrase “ if not for you.” Honors were also given to filmmakers Brad Allgood, Alejandra Amarilla and Julianna Penaranda-Loftus for their SXSW award winning film ‘Landfill Harmonics’, with a touching performance by the musician subjects of the film- playing on instruments they created from materials found in the garbage dumps of Paraguay. The inspiring night of films clips, songs and stories was capped by the poignant and haunting voice of singer and songwriter LP. After the program was over, guests lingered in the room, connecting and sharing the sparks that had clearly been ignited. “Turn On LA” was followed by a weekend full of activities at the Creative Visions Malibu campus, and a final “sundowner” gathering with all out of town guests, Creative Activist Program members, and Creative Activist Network members. For more information and to get involved: www.creativevisions.org

The Local Malibu releases issue 20 with cover girl Jessie Schlossmann who tells us about her spiritual journey and her love for yoga. Local activists Kirby Kotler and daughter Kirra take a stand at the Coastal Commission, Whole Foods stirs up a whole lotta trouble with the Webster PTA and a WHOLE lot more in the new issue of The Local Malibu! 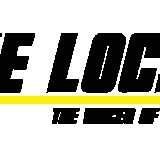