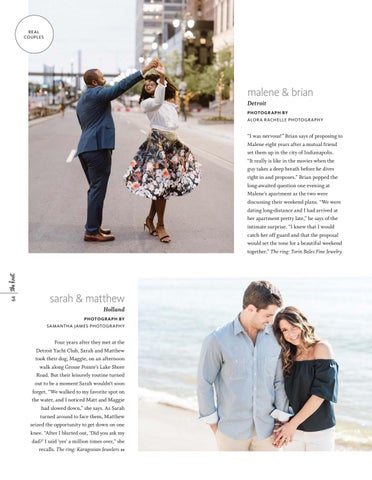 “I was nervous!” Brian says of proposing to Malene eight years after a mutual friend set them up in the city of Indianapolis. “It really is like in the movies when the guy takes a deep breath before he dives right in and proposes.” Brian popped the long-awaited question one evening at Malene’s apartment as the two were discussing their weekend plans. “We were dating long-distance and I had arrived at her apartment pretty late,” he says of the intimate surprise. “I knew that I would catch her off guard and that the proposal would set the tone for a beautiful weekend together.” The ring: Torin Bales Fine Jewelry

Four years after they met at the Detroit Yacht Club, Sarah and Matthew took their dog, Maggie, on an afternoon walk along Grosse Pointe’s Lake Shore Road. But their leisurely routine turned out to be a moment Sarah wouldn’t soon forget. “We walked to my favorite spot on the water, and I noticed Matt and Maggie had slowed down,” she says. As Sarah turned around to face them, Matthew seized the opportunity to get down on one knee. “After I blurted out, ‘Did you ask my dad?’ I said ‘yes’ a million times over,” she recalls. The ring: Karagosian Jewelers &gt;&gt;

From the #1 wedding website: TheKnot.com. Check out The Knot Michigan online magazine to make planning easier. Find all you need to know about Michigan weddings, including the best wedding chapels, wedding dresses and wedding venues in Michigan, including in Detroit and more. 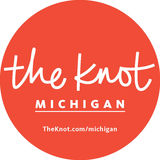