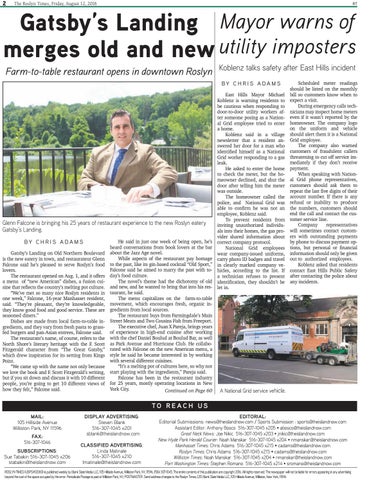 Glenn Falcone is bringing his 25 years of restaurant experience to the new Roslyn eatery Gatsby’s Landing. BY C H R I S A DA M S Gatsby’s Landing on Old Northern Boulevard is the new eatery in town, and restaurateur Glenn Falcone said he’s pleased to serve Roslyn’s food lovers. The restaurant opened on Aug. 1, and it offers a menu of “new American” dishes, a fusion cuisine that reflects the country’s melting pot culture. “We’ve met so many nice Roslyn residents in one week,” Falcone, 16-year Manhasset resident, said. “They’re pleasant, they’re knowledgeable, they know good food and good service. These are seasoned diners.” Dishes are made from local farm-to-table ingredients, and they vary from fresh pasta to grassfed burgers and pan-Asian entrees, Falcone said. The restaurant’s name, of course, refers to the North Shore’s literary heritage with the F. Scott Fitzgerald character from “The Great Gatsby,” which drew inspiration for its setting from Kings Point. “We came up with the name not only because we love the book and F. Scott Fitzgerald’s writing, but if you sit down and discuss it with 10 different people, you’re going to get 10 different views of how they felt,” Falcone said.

He said in just one week of being open, he’s heard conversations from book lovers at the bar about the Jazz Age novel. While aspects of the restaurant pay homage to the past, like its gin-based cocktail “Old Sport,” Falcone said he aimed to marry the past with today’s food culture. The novel’s theme had the dichotomy of old and new, and he wanted to bring that into his restaurant, he said. The menu capitalizes on the farm-to-table movement, which encourages fresh, organic ingredients from local sources. The restaurant buys from Farmingdale’s Main Street Meats and Two Cousins Fish from Freeport. The executive chef, Juan X Pareja, brings years of experience in high-end cuisine after working with the chef Daniel Boulud at Boulud Bar, as well as Park Avenue and Hurricane Club. He collaborated with Falcone on the new American menu, a style he said he became interested in by working with several different cuisines. “It’s a melting pot of cultures here, so why not start playing with the ingredients,” Pareja said. Falcone has been in the restaurant industry for 25 years, mostly operating locations in New York City. Continued on Page 60

East Hills Mayor Michael Koblenz is warning residents to be cautious when responding to door-to-door utility workers after someone posing as a National Grid employee tried to enter a home. Koblenz said in a village newsletter that a resident answered her door for a man who identified himself as a National Grid worker responding to a gas leak. He asked to enter the home to check the meter, but the homeowner declined, and shut the door after telling him the meter was outside. The homeowner called the police, and National Grid was able to confirm he was not an employee, Koblenz said. To prevent residents from inviting unauthorized individuals into their homes, the gas provider shared information about correct company protocol. National Grid employees wear company-issued uniforms, carry photo ID badges and travel in clearly marked company vehicles, according to the list. If a technician refuses to present identification, they shouldn’t be let in.

Scheduled meter readings should be listed on the monthly bill so customers know when to expect a visit. During emergency calls technicians may inspect home meters even if it wasn’t reported by the homeowner. The company logo on the uniform and vehicle should alert them it is a National Grid employee. The company also warned customers of fraudulent callers threatening to cut off service immediately if they don’t receive payment. When speaking with National Grid phone representatives, customers should ask them to repeat the last five digits of their account number. If there is any refusal or inability to produce the numbers, customers should end the call and contact the customer service line. Company representatives will sometimes contact customers with outstanding payments by phone to discuss payment options, but personal or financial information should only be given out to authorized employees. Koblenz asked that residents contact East Hills Public Safety after contacting the police about any incidents.

ROSLYN TIMES (USPS#12080) is published weekly by Blank Slate Media LLC, 105 Hillside Avenue, Williston Park, NY, 11596, (516) 307-1045. The entire contents of this publication are copyright 2016. All rights reserved. The newspaper will not be liable for errors appearing in any advertising beyond the cost of the space occupied by the error. Periodicals Postage is paid at Williston Park, NY, POSTMASTER. Send address changes to the Roslyn Times, C/O Blank Slate Media LLC, 105 Hillside Avenue, Williston, New York, 11596. 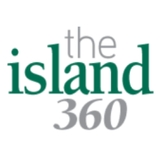