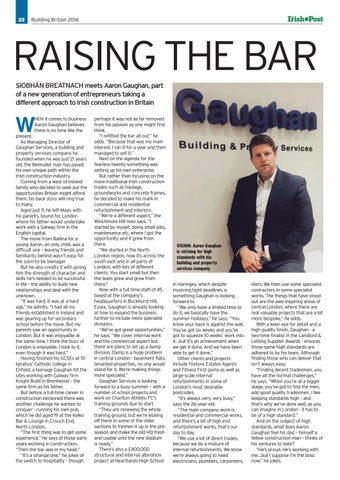 present. As Managing Director of Gaughan Services, a building and property services company he founded when he was just 21 years old, the Belmullet man has paved his own unique path within the Irish construction industry. Coming from a west of Ireland family who decided to seek out the opportunities Britain might afford them, his back story will ring true to many. Aged just 11, he left Mayo with his parents, bound for London where his father would undertake work with a Galway firm in the English capital. The move from Ballina for a young Aaron, an only child, was a difficult one – leaving friends and familiarity behind wasn’t easy for the soon-to-be teenager. But he also credits it with giving him the strength of character and skills he’s needed to be successful in life – the ability to build new relationships and deal with the unknown. “It was hard, it was at a hard age,” he admits. “I had all my friends established in Ireland and was gearing up for secondary school before the move. But my parents saw an opportunity in London. But it was enjoyable at the same time, I think the buzz of London is enjoyable. I took to it, even though it was hard.” Having finished his GCSEs at St Ignatius’ Catholic college in Enfield, a teenage Gaughan hit the sites working with Galway firm Knight Build in Brentwood – the same firm as his father. But before a full-time career in construction beckoned there was another challenge he wanted to conquer - running his own pub, which he did aged 19 at the Kelko Bar & Lounge in Crouch End, North London. “The first thing was to get some experience,” he says of those early years working in construction. “Then the bar was in my head.” “It’s a strange one,” he jokes of the switch to hospitality – though

perhaps it was not as far removed from his passion as one might first think. “I refitted the bar all out,” he adds. “Because that was my main interest. I ran it for a year and then managed to sell it.” Next on the agenda for the fearless twenty-something was setting up his own enterprise. But rather than focusing on the more traditional Irish construction trades such as haulage, groundworks and concrete frames, he decided to make his mark in commercial and residential refurbishment and interiors. “We’re a different aspect,” the Winchmore Hill man says. “I started by myself, doing small jobs, maintenance etc, where I got the opportunity and it grew from there. “We started in the North London region, now it’s across the south east and in all parts of London, with lots of different clients. You start small but then the team grew and grew from there.” Now with a full time staff of 45 based at the company’s headquarters in Buckhurst Hill, Essex, Gaughan is already looking at how to expand the business further to include more specialist divisions. “We’ve got great opportunities,” he says. “We cover internal work and the commercial aspect but there are plans to set up a damp division. Damp is a huge problem in central London - basement flats, tenanted properties, no one would stand for it. We’re making things more specialist.” Gaughan Services is looking forward to a busy summer – with a number of school projects and work on Charlton Athletic FC’s training grounds due to start. “They are renewing the whole training ground, but we’re kicking off there in some of the older sections to freshen it up in the preseason and make the old HQ fresh and usable until the new stadium is ready.” There’s also a £400,000 structural and internal alteration project at Heartlands High School

VISION: Aaron Gaughan is striving for high standards with his building and property services company in Haringey, which despite involving tight deadlines is something Gaughan is looking forward to. “We only have a limited time to do it, we basically have the summer holidays,” he says. “You know your back is against the wall. You’ve got six weeks and you’ve got to squeeze 10 weeks’ work into it…but it’s an achievement when we get it done. And we have been able to get it done.” Other clients and projects include Foxtons Estates Agents and Fitness First gyms as well as large-scale internal refurbishments in some of London’s most desirable postcodes. “It’s always very, very busy,” says the 26-year-old. “The main company work is residential and commercial works, and there’s a lot of high end refurbishment works, that’s our day to day. “We use a lot of direct trades, because we do a mixture of internal refurbishments. We know we’re always going to need electricians, plumbers, carpenters,

tilers. We then use some specialist contractors in some specialist works. The things that have stood out are the awe-inspiring areas of central London, where there are real valuable projects that are a bit more bespoke,” he adds. With a keen eye for detail and a high quality finish, Gaughan - a two-time finalist in the Landlord & Letting Supplier Awards - ensures those same high standards are adhered to by his team. Although finding those who can deliver that isn’t always easy. “Finding decent tradesmen, you have all the normal challenges,” he says. “When you’re at a bigger stage, you’ve got to find the men, add good quality tradesmen. I like keeping standards high – and that’s why we’ve done well, as you can imagine in London - it has to be of a high standard.” And on the subject of high standards, what does Aaron Gaughan feel his dad – himself a fellow construction man – thinks of his ventures to date? “He’s proud. He’s working with me…but I suppose I’m the boss now,” he jokes. 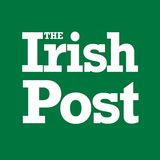