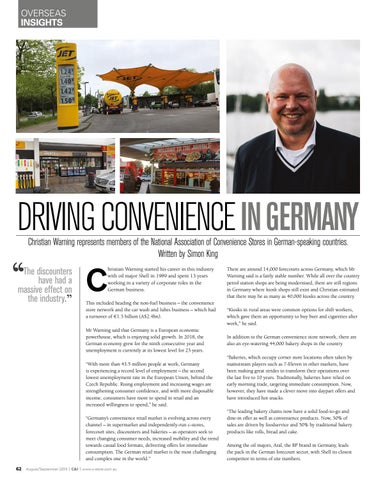 The discounters have had a massive effect on the industry.”

hristian Warning started his career in this industry with oil major Shell in 1989 and spent 13 years working in a variety of corporate roles in the German business.

This included heading the non-fuel business – the convenience store network and the car wash and lubes business – which had a turnover of ¤1.5 billion (A$2.4bn). Mr Warning said that Germany is a European economic powerhouse, which is enjoying solid growth. In 2018, the German economy grew for the ninth consecutive year and unemployment is currently at its lowest level for 25 years. “With more than 43.5 million people at work, Germany is experiencing a record level of employment – the second lowest unemployment rate in the European Union, behind the Czech Republic. Rising employment and increasing wages are strengthening consumer confidence, and with more disposable income, consumers have more to spend in retail and an increased willingness to spend,” he said. “Germany’s convenience retail market is evolving across every channel – in supermarket and independently-run c-stores, forecourt sites, discounters and bakeries – as operators seek to meet changing consumer needs, increased mobility and the trend towards casual food formats, delivering offers for immediate consumption. The German retail market is the most challenging and complex one in the world.”

There are around 14,000 forecourts across Germany, which Mr Warning said is a fairly stable number. While all over the country petrol station shops are being modernised, there are still regions in Germany where kiosk shops still exist and Christian estimated that there may be as many as 40,000 kiosks across the country. “Kiosks in rural areas were common options for shift workers, which gave them an opportunity to buy beer and cigarettes after work,” he said. In addition to the German convenience store network, there are also an eye-watering 44,000 bakery shops in the country. “Bakeries, which occupy corner store locations often taken by mainstream players such as 7-Eleven in other markets, have been making great strides to transform their operations over the last five to 10 years. Traditionally, bakeries have relied on early morning trade, targeting immediate consumption. Now, however, they have made a clever move into daypart offers and have introduced hot snacks. “The leading bakery chains now have a solid food-to-go and dine-in offer as well as convenience products. Now, 50% of sales are driven by foodservice and 50% by traditional bakery products like rolls, bread and cake. Among the oil majors, Aral, the BP brand in Germany, leads the pack in the German forecourt sector, with Shell its closest competitor in terms of site numbers.