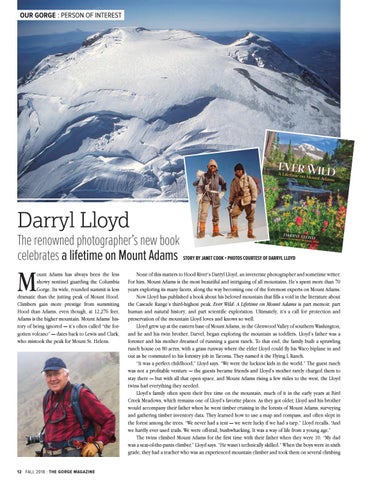 OUR GORGE : PERSON OF INTEREST

ount Adams has always been the less showy sentinel guarding the Columbia Gorge. Its wide, rounded summit is less dramatic than the jutting peak of Mount Hood. Climbers gain more prestige from summiting Hood than Adams, even though, at 12,276 feet, Adams is the higher mountain. Mount Adams’ history of being ignored — it’s often called “the forgotten volcano” — dates back to Lewis and Clark, who mistook the peak for Mount St. Helens.

None of this matters to Hood River’s Darryl Lloyd, an inveterate photographer and sometime writer. For him, Mount Adams is the most beautiful and intriguing of all mountains. He’s spent more than 70 years exploring its many facets, along the way becoming one of the foremost experts on Mount Adams. Now Lloyd has published a book about his beloved mountain that fills a void in the literature about the Cascade Range’s third-highest peak. Ever Wild: A Lifetime on Mount Adams is part memoir, part human and natural history, and part scientific exploration. Ultimately, it’s a call for protection and preservation of the mountain Lloyd loves and knows so well. Lloyd grew up at the eastern base of Mount Adams, in the Glenwood Valley of southern Washington, and he and his twin brother, Darvel, began exploring the mountain as toddlers. Lloyd’s father was a forester and his mother dreamed of running a guest ranch. To that end, the family built a sprawling ranch house on 80 acres, with a grass runway where the elder Lloyd could fly his Waco biplane in and out as he commuted to his forestry job in Tacoma. They named it the Flying L Ranch. “It was a perfect childhood,” Lloyd says. “We were the luckiest kids in the world.” The guest ranch was not a profitable venture — the guests became friends and Lloyd’s mother rarely charged them to stay there — but with all that open space, and Mount Adams rising a few miles to the west, the Lloyd twins had everything they needed. Lloyd’s family often spent their free time on the mountain, much of it in the early years at Bird Creek Meadows, which remains one of Lloyd’s favorite places. As they got older, Lloyd and his brother would accompany their father when he went timber cruising in the forests of Mount Adams, surveying and gathering timber inventory data. They learned how to use a map and compass, and often slept in the forest among the trees. “We never had a tent — we were lucky if we had a tarp,” Lloyd recalls. “And we hardly ever used trails. We were off-trail, bushwhacking. It was a way of life from a young age.” The twins climbed Mount Adams for the first time with their father when they were 10. “My dad was a seat-of-the-pants climber,” Lloyd says. “He wasn’t technically skilled.” When the boys were in sixth grade, they had a teacher who was an experienced mountain climber and took them on several climbing 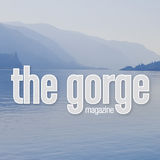