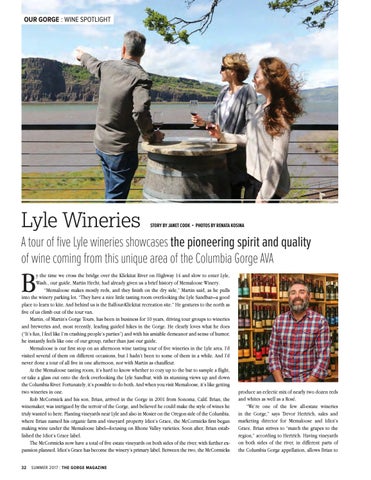 y the time we cross the bridge over the Klickitat River on Highway 14 and slow to enter Lyle, Wash., our guide, Martin Hecht, had already given us a brief history of Memaloose Winery. “Memaloose makes mostly reds, and they finish on the dry side,” Martin said, as he pulls into the winery parking lot. “They have a nice little tasting room overlooking the Lyle Sandbar—a good place to learn to kite. And behind us is the Balfour-Klickitat recreation site.” He gestures to the north as five of us climb out of the tour van. Martin, of Martin’s Gorge Tours, has been in business for 10 years, driving tour groups to wineries and breweries and, most recently, leading guided hikes in the Gorge. He clearly loves what he does (“It’s fun, I feel like I’m crashing people’s parties”) and with his amiable demeanor and sense of humor, he instantly feels like one of our group, rather than just our guide. Memaloose is our first stop on an afternoon wine tasting tour of five wineries in the Lyle area. I’d visited several of them on different occasions, but I hadn’t been to some of them in a while. And I’d never done a tour of all five in one afternoon, nor with Martin as chauffeur. At the Memaloose tasting room, it’s hard to know whether to cozy up to the bar to sample a flight, or take a glass out onto the deck overlooking the Lyle Sandbar, with its stunning views up and down the Columbia River. Fortunately, it’s possible to do both. And when you visit Memaloose, it’s like getting two wineries in one. Rob McCormick and his son, Brian, arrived in the Gorge in 2001 from Sonoma, Calif. Brian, the winemaker, was intrigued by the terroir of the Gorge, and believed he could make the style of wines he truly wanted to here. Planting vineyards near Lyle and also in Mosier on the Oregon side of the Columbia, where Brian named his organic farm and vineyard property Idiot’s Grace, the McCormicks first began making wine under the Memaloose label—focusing on Rhone Valley varieties. Soon after, Brian established the Idiot’s Grace label. The McCormicks now have a total of five estate vineyards on both sides of the river, with further expansion planned. Idiot’s Grace has become the winery’s primary label. Between the two, the McCormicks

produce an eclectic mix of nearly two dozen reds and whites as well as a Rosé. “We’re one of the few all-estate wineries in the Gorge,” says Trevor Hertrich, sales and marketing director for Memaloose and Idiot’s Grace. Brian strives to “match the grapes to the region,” according to Hertrich. Having vineyards on both sides of the river, in different parts of the Columbia Gorge appellation, allows Brian to