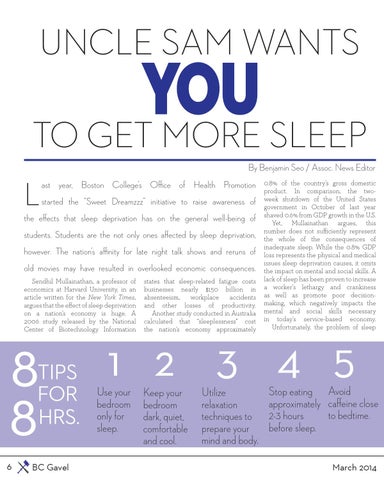 YOU TO GET MORE SLEEP By Benjamin Seo / Assoc. News Editor

the effects that sleep deprivation has on the general well-being of students. Students are the not only ones affected by sleep deprivation, however. The nation’s affinity for late night talk shows and reruns of old movies may have resulted in overlooked economic consequences. Sendhil Mullainathan, a professor of economics at Harvard University, in an article written for the New York Times, argues that the effect of sleep deprivation on a nation’s economy is huge. A 2006 study released by the National Center of Biotechnology Information

states that sleep-related fatigue costs businesses nearly $150 billion in absenteeism, workplace accidents and other losses of productivity. Another study conducted in Australia calculated that “sleeplessness” cost the nation’s economy approximately

0.8% of the country’s gross domestic product. In comparison, the twoweek shutdown of the United States government in October of last year shaved 0.6% from GDP growth in the U.S. Yet, Mullainathan argues, this number does not sufficiently represent the whole of the consequences of inadequate sleep. While the 0.8% GDP loss represents the physical and medical issues sleep deprivation causes, it omits the impact on mental and social skills. A lack of sleep has been proven to increase a worker’s lethargy and crankiness as well as promote poor decisionmaking, which negatively impacts the mental and social skills necessary in today’s service-based economy. Unfortunately, the problem of sleep

Use your bedroom only for sleep.

Utilize relaxation techniques to prepare your mind and body. 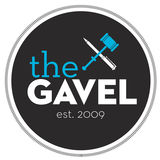