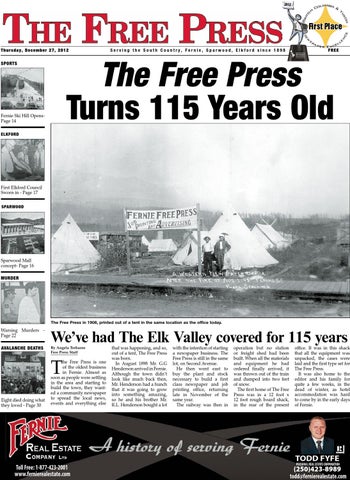 The Free Press in 1908, printed out of a tent in the same location as the office today.

he Free Press is one of the oldest business in Fernie. Almost as soon as people were settling in the area and starting to build the town, they wanted a community newspaper to spread the local news, events and everything else

that was happening, and so, out of a tent, The Free Press was born. In August 1898 Mr. G.G Henderson arrived in Fernie. Although the town didn’t look like much back then, Mr. Henderson had a hunch that it was going to grow into something amazing, so he and his brother Mr. R.L. Henderson bought a lot

with the intention of starting a newspaper business. The Free Press is still in the same lot, on Second Avenue. He then went east to buy the plant and stock necessary to build a first class newspaper and job printing office, returning late in November of the same year. The railway was then in

office. It was in this shack that all the equipment was unpacked, the cases were laid and the first type set for The Free Press. It was also home to the editor and his family for quite a few weeks, in the dead of winter, as hotel accommodation was hard to come by in the early days of Fernie.

operation but no station or freight shed had been built. When all the materials and equipment he had ordered finally arrived, it was thrown out of the train and dumped into two feet of snow. The first home of The Free Press was in a 12 foot x 12 foot rough board shack, in the rear of the present 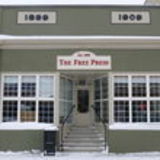