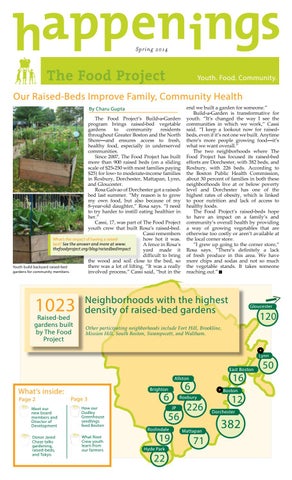 Our Raised-Beds Improve Family, Community Health By Charu Gupta The Food Project’s Build-a-Garden program brings raised-bed vegetable gardens to community residents throughout Greater Boston and the North Shore—and ensures access to fresh, healthy food, especially in underserved communities. Since 2007, The Food Project has built more than 900 raised beds (on a sliding scale of $25-250 with most families paying $25) for low- to moderate-income families in Roxbury, Dorchester, Mattapan, Lynn, and Gloucester. Rosa Galvao of Dorchester got a raisedbed last summer. “My reason is to grow my own food, but also because of my 8-year-old daughter,” Rosa says. “I need to try harder to instill eating healthier in her.” Cassi, 17, was part of The Food Project youth crew that built Rosa’s raised-bed. Cassi remembers how hot it was. What’s the impact of having a raisedbed? See the answer and more at www. A fence in Rosa’s thefoodproject.org/blog/raisedbedimpact yard made it difficult to bring the wood and soil close to the bed, so there was a lot of lifting. “It was a really Youth build backyard raised-bed gardens for community members. involved process,” Cassi said, “but in the

end we built a garden for someone.” Build-a-Garden is transformative for youth. “It’s changed the way I see the communities in which we work,” Cassi said. “I keep a lookout now for raisedbeds, even if it’s not one we built. Anytime there’s more people growing food—it’s what we want overall.” The two neighborhoods where The Food Project has focused its raised-bed efforts are Dorchester, with 382 beds, and Roxbury, with 226 beds. According to the Boston Public Health Commission, about 30 percent of families in both these neighborhoods live at or below poverty level and Dorchester has one of the highest rates of obesity, which is linked to poor nutrition and lack of access to healthy foods. The Food Project’s raised-beds hope to have an impact on a family’s and community’s overall health by providing a way of growing vegetables that are otherwise too costly or aren’t available at the local corner store. “I grew up going to the corner store,” Rosa says. “There’s definitely a lack of fresh produce in this area. We have more chips and sodas and not so much the vegetable stands. It takes someone reaching out.”

Neighborhoods with the highest density of raised-bed gardens

Meet our new board members and Director of Development

What Root Crew youth learn from our farmers

Four Individuals Join Board of Trustees

as its new director of development and external communications. Angela was most recently with the Women’s Lunch Place in Boston, and spent many years with university development departments. “Angela brings years of experience and a strong track record in major gifts and strategic fundraising and planning,” said Selvin Chambers, the executive director of The Food Project. Angela started her development career at the Boston Conservatory, where she also received bachelor’s and master’s degrees in voice performance. Angela also has a bachelor’s degree in biology, with a minor in chemistry and sports medicine.

Too soon, it’s time to walk back to school. As the children rush to line up, they’re bursting with enthusiasm: “I found three bugs!” one reports. “I’m the messiest!” shouts another, holding up dirt-covered hands to illustrate his point. The new school year has only just begun and the students are already proving themselves eager gardeners -in-training.

Too soon, it’s time to walk back to school. As the children rush to line up, they’re bursting with enthusiasm: “I found three bugs!” one reports. “I’m the messiest!” shouts another, holding up dirt-covered hands to illustrate his point. The new school year has only just begun and the students are already proving themselves eager gardeners -in-training.

He Had These Green Beans By Charu Gupta This spring, youth from The Food Project will build a set of four 4-feet by 8-feet raised-beds in Jared Chase’s garden. To have a bigger vegetable garden is a dream Jared has had since he began growing vegetables with his grandfather as a child. It all came together when he recently purchased the perfect piece of land and then saw Jared Chase an auction item for raised-beds at The Food Project’s Gala last year. “I set my sights on the raised bed auction item,” said Jared. “I’ve always loved plants and gardening, but not always had the time or ability.” Jared, who now lives in Boston and York, Maine, spent 35 years in global investment banking, living in London, Tokyo and Singapore. In Tokyo, space was so limited he

noticed how residents would find and The Food Project does that for Styrofoam containers and use them youth.” to make raised beds for any sunny For Jared, that experience was spot in their homes. spending time in his grandfather’s “I’d go for a run and spot garden during childhood summers. these containers in the “I was very close to him. back of a restaurant He had these green and grab them. I beans. ‘Kentucky had three or four, Wonders’ they just enough to keep were called. I my hand in it.” remember picking People who are It’s not just those beans and really involved in about raised-beds for eating them that Jared. His support evening. How much I the natural world of The Food Project still enjoy green beans can identify an comes from a deeper ties to my memory of my experience that conviction and grandparents and their led to their longtime passion garden.” interest. for conservation and With The Food Project’s - Jared Chase sustainability. Jared youth builders, Jared will is the chair of the Board finally have four raised bed of Trustees at Mass Audubon and gardens. What does he plan to serves on the Board of Trustees of plant? “My wife likes kale,” he said. the New England Aquarium. “And my favorite—green beans.” “I think people who are really involved in the natural world can Go online to hear more from Jared and identify a specific event or summer see styrofoam beds in Tokyo: www. or experience that led to their interest thefoodproject.org/blog/jaredchase and support of the natural world

Each year, The Food Project’s Dudley Greenhouse provides space and resources for community groups looking to increase food access in Roxbury, Dorchester, and Mattapan. The impact is always exponential.

1 GREENHOUSE It starts in

grown in Roxbury, 24,500 POUNDS OF PRODUCEareDorchester, and Mattapan = 1,000 pounds which provides

with a week’s worth of food

A Harvest Built On Collaboration By heather hammel On The Food Project’s West Cottage Farm, two 4-feet by 8-feet raised-beds are nestled into the earth. They belong to the Greater Boston Root Crew, formerly known as the Internship Program, a group of high school students who have been with The Food Project for at least two seasons. Ricky, 16, and Lucas, 18, both in Root Crew, kneel around their raisedbed. They’re impressed by the alarming speed with which fragile seeds have come to life, but are quickly discovering that growing vegetables is not easy. “It’s not as simple as putting a seed in the ground and watering it,” Ricky said. Ricky and Lucas developed their gardening projects in conjunction with The Food Project’s farmers, as each stage of the growing season presents a unique educational opportunity. Operating within the small space of a one-acre urban farm, for example, provides a base of knowledge that youth can apply to their own growing endeavors. Robyn Burns is The Food Project’s North Shore urban agriculture manager. “I put a lot of thought into how to have youth intersect with

all aspects of our farm work, to have a balance of all of the things we do from planting and harvesting to markets and crop maintenance,” Robyn said. In very early spring, farmers and youth enter into a dialogue through garden planning workshops. Youth in Greater Boston and on the North Shore learn the basics to start their own garden and, eventually, a larger scale community garden. Deciding what to grow is a personal and collaborative exercise. “I started by asking people at home what we would use for meals,” Ricky said. “As a family, we came up with the vegetables we would want to eat often.” The youth compared their lists, growing more of the vegetables in which there was a lot of overlapping interest. Beets, carrots, and radishes made the final cut. Once planted, caring for the beds requires a team effort. “You have to tend to it on a daily basis,” Ricky said. Whether it is working in small groups to manage their own raised-bed garden, or developing a garden crop plan for a community Find our farmers and their crop planning thoughts and photos at www. thefoodproject.org/blog/cropplan

*Curious about these numbers? See our math at thefoodproject.org/blog/seedlings

group, youth develop valuable skills while carrying out a growing season from start to end—independent and cooperative decision making, balancing consumer tastes with growing feasibility, and patience. Back at the West Cottage Farm, Ricky reflects on the lesson of the moment: less is sometimes more. The radish seeds had been the first to sprout but had to be declared a lost cause due to overcrowding—the seeds had been planted too close to grow roots. “You have to know how much to space them out so that they have room to grow,” Ricky said. “It’s very strategic.”

Root crew members Ricky, 16, from Roxbury, (right) and Will, 18, from Brookline (left) are experienced at building raised-bed gardens.

Please join Cirque du Soleil® for a performance of Amaluna™ to benefit The Food Project. Friday, June 20, 2014 at 8 p.m. Purchase your tickets at thefoodproject.org/cirque or call Elizabeth Gohringer at 781-259-8621 x38

The Food Project’s mission is to create a thoughtful and productive community of youth and adults from diverse backgrounds who work together to build a sustainable food system. Our community produces healthy food for residents of the city and suburbs, provides youth leadership opportunities, and inspires and supports others to create change in their own communities. 120 Munroe Street Lynn, MA 01901 781-346-6726 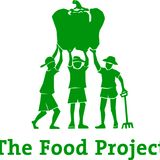 More from The Food Project