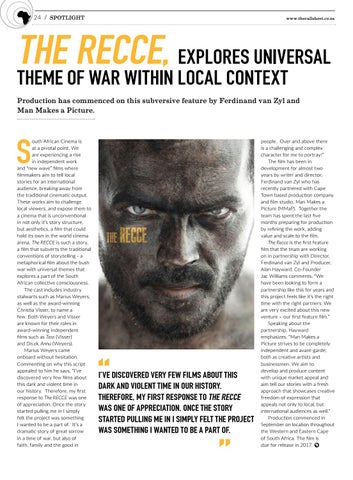 THEME OF WAR WITHIN LOCAL CONTEXT

Production has commenced on this subversive feature by Ferdinand van Zyl and Man Makes a Picture.

outh African Cinema is at a pivotal point. We are experiencing a rise in independent work and “new wave” ﬁlms where ﬁlmmakers aim to tell local stories for an international audience, breaking away from the traditional cinematic output. These works aim to challenge local viewers, and expose them to a cinema that is unconventional in not only it’s story structure, but aesthetics, a ﬁlm that could hold its own in the world cinema arena. The RECCE is such a story, a ﬁlm that subverts the traditional conventions of storytelling - a metaphorical ﬁlm about the bush war with universal themes that explores a part of the South African collective consciousness. The cast includes industry stalwarts such as Marius Weyers, as well as the award-winning Christia Visser, to name a few. Both Weyers and Visser are known for their roles in award-winning independent ﬁlms such as Tess (Visser) and Dis ek, Anna (Weyers). Marius Weyers came onboard without hesitation. Commenting on why this script appealed to him he says, “I’ve discovered very few ﬁlms about this dark and violent time in our history. Therefore, my ﬁrst response to The RECCE was one of appreciation. Once the story started pulling me in I simply felt the project was something I wanted to be a part of. It’s a dramatic story of great sorrow in a time of war, but also of faith, family and the good in

I’VE DISCOVERED VERY FEW FILMS ABOUT THIS DARK AND VIOLENT TIME IN OUR HISTORY. THEREFORE, MY FIRST RESPONSE TO THE RECCE WAS ONE OF APPRECIATION. ONCE THE STORY STARTED PULLING ME IN I SIMPLY FELT THE PROJECT WAS SOMETHING I WANTED TO BE A PART OF.

people. Over and above there is a challenging and complex character for me to portray!” The ﬁlm has been in development for almost two years by writer and director, Ferdinand van Zyl who has recently partnered with Cape Town based production company and ﬁlm studio, Man Makes a Picture (MMaP). Together the team has spent the last ﬁve months preparing for production by reﬁning the work, adding value and scale to the ﬁlm. The Recce is the ﬁrst feature ﬁlm that the team are working on in partnership with Director, Ferdinand van Zyl and Producer, Alan Hayward. Co-Founder Jac Williams comments, “We have been looking to form a partnership like this for years and this project feels like it’s the right time with the right partners. We are very excited about this new venture – our ﬁrst feature ﬁlm.” Speaking about the partnership, Hayward emphasizes, “Man Makes a Picture strives to be completely independent and avant-garde; both as creative artists and businessmen. We aim to develop and produce content with unique market appeal and aim tell our stories with a fresh approach that showcases creative freedom of expression that appeals not only to local, but international audiences as well.” Production commenced in September on location throughout the Western and Eastern Cape of South Africa. The ﬁlm is due for release in 2017. 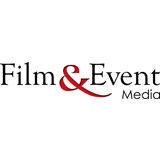 The Callsheet Issue 10 is brought to you by Film & Event Media. In October we bring you a look at game changers, role models and pioneers in...

The Callsheet Issue 10 is brought to you by Film & Event Media. In October we bring you a look at game changers, role models and pioneers in...