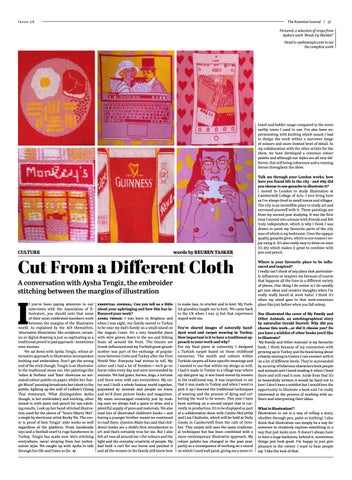 Pictured, a selection of crops from Aysha’s work ‘Break Up Blanket” Head to ayshatengiz.com to see the complete work

brant and bolder range compared to the more earthy tones I used to use. I’ve also been experimenting with knitting which meant I had to design the work within a narrower range of colours and more limited level of detail. In my collaboration with the other artists for the show, we have developed a common colour palette and although our styles are all very different, this will bring coherence and a running theme throughout the show.

Cut From a Different Cloth A conversation with Aysha Tengiz, the embroider stitching between the margins of illustration

f you’ve been paying attention to our interviews with the Association of Illustrators, you should note that some of their most celebrated members work between the margins of the illustrative world. As explained by the AOI themselves, ‘alternative illustration’ like sculpture, ceramics or digital drawing is just as captivating as a traditional pencil to pad approach - sometimes even moreso. We sat down with Aysha Tengiz, whose alternative approach to illustration incorporates knitting and embroidery. Don’t get the wrong end of the stick though, Tengiz is an illustrator in the traditional sense too. Her paintings like ‘Adam &amp; Stefano’ and ‘Rats’ showcase an animated colour palette on paper, whilst her ‘Jungle Mural’ painting broadcasts her talent to the public, lighting up the wall of Ludlow’s Chang Thai restaurant. What distinguishes Aysha though, is her embroidery and knitting, often mixed in with paint and pencil for eye-catching results. Look up her hand-stitched illustration used for the sleeve of “Yours (Marry Me)”, a single by electronic artist Rocky Nti. The cover is proof of how Tengiz’ style works so well regardless of the platform. From handmade toys and a football scarf to rugs handwoven in Turkey, Tengiz has made sure she’s stitching everywhere, never straying from her technicolour style. We caught up with Aysha to talk through her life and times so far. EJ

essential journal: Can you tell us a little about your upbringing and how this has influenced your work? aysha tengiz: I was born in Brighton and when I was eight, our family moved to Turkey to be near my dad’s family on a small island on the Aegean Coast. It’s a very beautiful place with olive groves down to the sea and fishing boats all around the front. The houses are Greek-influenced and my Turkish great-grandmother was part of the exchange of populations between Crete and Turkey after the First World War. Everyone had stories to tell. My sister and I had a lot of freedom – we’d go on horse rides every day and were surrounded by animals. We had goats, horses, dogs, a tortoise and there were wild cats everywhere. My sister and I built a whole fantasy world together, populated by animals and people we knew and we’d draw picture books and magazines. My mum encouraged creativity just by making sure we always had a space to draw and a plentiful supply of pens and materials. We also read lots of illustrated children’s books – and having a younger brother meant we continued to read them. Quentin Blake has said that children’s books are a child’s first introduction to art and that’s certainly true for me. But I also felt art was all around me – the colours and the light and the everyday creativity of people. My dad built a cart for our horse and painted it and all the women in the family still knew how

to make lace, to crochet and to knit. My Turkish grandma taught me to knit. We came back to the UK when I was 13 but that experience stayed with me. You’ve shared images of naturally handdyed wool and carpet weaving in Turkey. How important is it to have a traditional approach to your work and why? For my final piece at university I designed a Turkish carpet based on those childhood memories. The motifs and colours within Turkish carpets all have specific meanings and I wanted to use that within my design as well. I had it made in Turkey in a village near where my dad grew up, it was hand woven by women in the traditional way. It was important to me that it was made in Turkey and when I went to pick it up I learned the traditional techniques of weaving and the process of dying and collecting the wool to be woven. This year I have been working on a second carpet that is currently in production. It’s to be displayed as part of a collaborative show with Caitlin McCarthy and Lisa Chisholm, which will be held at Daily Goods in Camberwell from the 12th of October. This carpet still uses the same traditional techniques but has been combined with a more contemporary illustrative approach. My colour palette has changed in the past year, partly as a consequence of working on a mural on which I used wall paint, giving me a more vi-

Talk me through your London works, how have you found life in the city - and why did you choose to use gouache to illustrate it? I moved to London to study illustration at Camberwell College of Arts. I love living here as I’ve always lived in small towns and villages. The city is an incredible place to study art and surround yourself with it. These paintings are from my second year studying. It was the first time I moved into a house with friends and felt truly independent, which is why I think I was drawn to paint my favourite parts of the city (one of which is my bedroom). I love the opaque quality gouache gives, which is one reason I enjoy using it. It’s also really easy to draw on once it’s dry which makes it great to combine with pen and pencil. Where is your favourite place to be influenced and inspired? I really can’t think of any place that particularly influences or inspires me because of course that happens all the time in a different variety of places. One thing I do notice is I do usually get new ideas and creative thoughts when I’m really really bored at work haha! I think it’s when my mind goes to that semi-conscious place like just before when you fall asleep. You illustrated the cover of My Family and Other Animals, an autobiographical story by naturalist Gerald Durrell. Why did you choose this work...or did it choose you? Do you have a wishlist of other books you’d like to illustrate? ‘My Family and Other Animals’ is my favourite book, I think because of my connection with growing up in Turkey and the book being about a family moving to Greece I can connect with it on a lot of different levels. They’re surrounded by an array of hilarious characters both people and animals and I loved reading it when I lived there and still read it now. Aside from that it’s so beautifully written it would be hard not to love! I don’t have a wishlist but I would love the opportunity to illustrate a book and I’m really interested in the process of working with authors and interpreting their ideas. What is illustration?! Illustration to me is a way of telling a story, whether through pen, paint or knitting! I also think that illustration can simply be a way for someone to creatively express something in a way that just looks nice. It doesn’t always have to have a huge backstory behind it, sometimes things just look good. I’m happy to just give pleasure to the viewer. I want to hear people say ‘I like the look of that’.

“Change your life today. Don’t gamble on the future, act now, without delay.” - Simone De Beauvoir We’re feeling motivated this month. A few days of rain has condemned summer to the history books and we don’t even mind, it’s time to jump head first into autumn. Lovely-golden-still-a-bit-sunny-but-you-might-need-a-new-coat autumn. In this issue we preview the upcoming Roy Lichtenstein exhibition at the Tate (which we’re very excited about, hence the cover) we try and persuade you to bike into work (with a couple of tips and recommend-ations), and welcome a new monthly architecture feature courtesy of the extremely interesting and articulate gents over at Archiphonic. There was also enough space for an interview with one of our favourite illustrators, a look at high-quality American denim and of course our trademark mixture of lifestyle, culture and style. The perfect com-panion to a rainy September day, if we do say so ourselves. 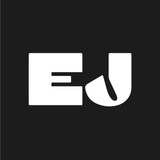